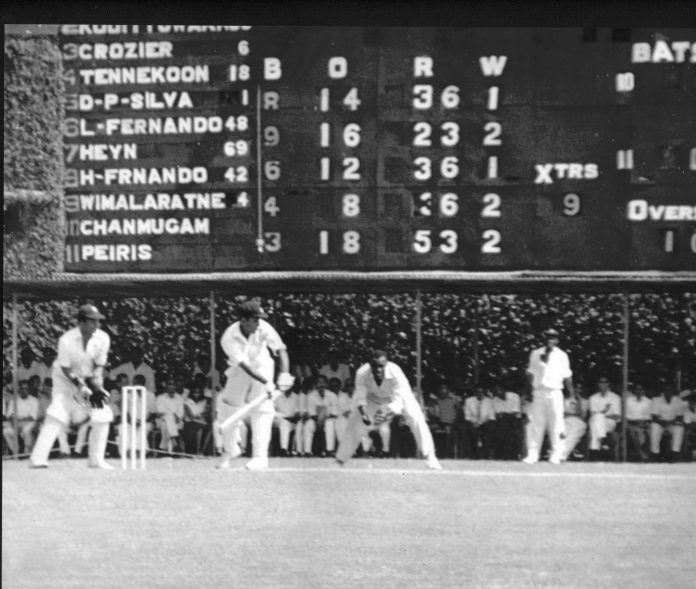 Of all cricket grounds in Asia, the P. Sara Oval is the only one that hosted the great Sir Don Bradman.

There are two images of the greatest batsman to play the game at the main pavilion of the ground. One image captured him going out to bat and in another, the Australian captain is accompanying his Sri Lankan counterpart Mahadevan Sathasivam to the coin toss. The oldest living Ceylonese cricketer Mr. Chandra Schaffter, who will turn 90 next year, told our Legend’s segment how Bradman described The Oval scoreboard as the most descriptive one in the world.

Built by the first President of the Ceylon Cricket Association, Paikiasothy Saravanamuttu in 1943, the venue hosted many international teams during those stop over tours. Teams travelling to England or Australia in ships, used to stop in Colombo for a few days and  the odd game was slotted in at the P. Sara Oval. When Saravanamuttu died in 1977, Tamil Union named the ground after the man who built it.

The Oval is unique in many ways. Before the game became professional and qualified curators took over, the stripes at The Oval were prepared by ladies. They used to serve the ground until very recently. Saroja is the one who is known to the modern generation.  She was adored by those at Tamil Union. The club got all the praise from visiting teams for preparing fine tracks but Saroja hardly got any mention or media exposure.

She actually took over from her sister, Amaravathy. More than anybody, she knew that a good cricket wicket had to offer assistance for seamers, batsmen and spinners.

Before sisters Saroja and Amaravathy was the great Innasi Amma. Whether it be Bradman, Sobers, Worrell, Gavaskar, Imran, Botham or Mendis they had all played on the tracks that she had prepared.

There was some controversy when Bradman’s invincibles toured in 1948. In a game where Bradman only made 20, the Aussies pointed out that the length of the pitch was only 20 yards.

Jack Fingleton, who played 18 Test matches for Australia and then went onto become a celebrated cricket writer made some interesting remarks in his book, ‘‘Brightly Fades the Don.’’

“It is possible that one of her male assistants measured the pitch and not she. The Australian batsmen found the going rather tough in the morning. It was hard to get the ball away, and it was Ian Johnson who discovered largely why. He had his doubts, measured it and found it was only twenty yards. From that point onwards, the Aussies bowled two yards behind the crease,” Fingelton went onto write.

The Oval obviously has hosted some very special games. The inaugural Test was played here while Sri Lanka’s first Test win was also recorded at this ground. Rumesh Ratnayake’s stunning return catch to complete Sri Lanka’s maiden Test win over India should be also framed in the club house.

The first ever neutral Test match was also played here. Australia refused to tour Pakistan in 2002 but were happy to play the Test match in Colombo. And it was a cracking game of cricket. Lucky were the ones who witnessed that game.

This was Shoaib Akthar at his best. Bowling his thunderbolts with the new  ball and then reverse swinging the old ball to deadly effect, his pace was too much for the Aussies. You may witness several hat-tricks in cricket but there won’t be a better one than that Shoaib completed at The Oval.

In a game which Pakistan went onto lose by 41 runs, Shoaib removed Ricky Ponting and the Waugh twins in successive deliveries. It is unlikely that a more famous batting line-up will succumb to a hat-trick than this one. Ricky and Mark were cleaned up by Shoaib and captain Steve was plumb in front with the next delivery.

The club was burned down during the July 1983 riots. Some wealthy businessmen associated with cricket doled out generously to help the club rebuild. As Sri Lanka Cricket got richer, many new grounds too emerged with modern facilities and The Oval was left behind. For a significant period of time, the ground didn’t host any international cricket.

Some prominent members of the club then came forward to put up new stands at the venue and bring it to international standards. SLC also contributed towards the development work a decade ago and at present the venue gets regular international exposure.

Of all grounds in Sri Lanka, fast bowlers enjoy playing at The Oval the most as the true bounce of the wicket gives them some assistance. The hosts  have been well and truly exposed here as well having lost five of their last seven Tests.