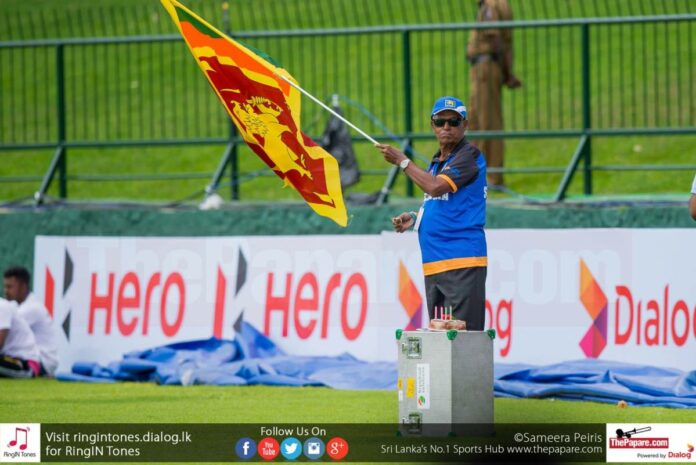 Ten years since the International Cricket Council introduced the ICC Hall of Fame, two Sri Lankans have been named in that exclusive club.

Two years after the world’s highest wicket taker Muttiah Muralitharan was inducted as the first Sri Lankan, his fellow Kandyan Kumar Sangakkara has joined the elite club. Trinitians and Antonians now have another interesting debate when they meet up.

More Sri Lankans will be inducted into the Hall of Fame down the line. But, we wonder whether these inductions should be exclusively to the men who have played the great game at the highest level. What about others like administrators, coaches, umpires, scorers, fans and of course sponsors who all have got the game going thanks to their untiring efforts.

Here are some of the men who have made massive contributions for cricket in Sri Lanka without whose efforts the game wouldn’t be what it is today.

He was the son of the nation’s first Prime Minister and the brother of the second. He was President of the Cricket Board for over 20 years and Sri Lanka became an Associate Member of the ICC during his long tenure as President.

In a day and age when the game had no money, he bankrolled the sport’s expenses like during the team’s early visits overseas or when teams came over here. He was instrumental in sending over Sri Lankan curators and coaches to Pakistan to fine tune their skills with the help of his Pakistani counterpart Abdul Hafeez Kardar.

An absolute legend of the game, he served the Cricket Board for well over a quarter of a century in various capacities as Vice-President, Secretary and Team Manager. When Sri Lanka recorded their first Test win overseas – New Zealand 1995 – he was the Manager.

His biggest contribution to cricket was when he successfully convinced India and Pakistan to enter a joint bid in hosting the 1996 World Cup. It remains one of the best World Cups that has been ever played.

He is the man who won Sri Lanka Test status. There was never a doubt about the nation’s skills when it came to the sport, but the guardians of the game – Australia and England – with their veto power, had reservations about the cricketing infrastructure.

So many before him had failed in winning Test status but Dissanayake did it in his first attempt. So powerful and compelling was his speech, that Sidath Wettimuny told our Legends segment that the Chairman of Test and County Cricket Board George Mann, who had to deliver a speech after Dissanayake, went on record that it was a ‘tough act to follow’.

Someone who loved cricket deeply, Singer Sri Lanka, where he was Managing Director, came in with a generous sponsorship in the mid 1990s. It was a godsend. At a time when there was barely enough money to pay salaries, it was the Singer’s sponsorship that helped the Cricket Board to look at the possibilities of hiring employees to efficiently run the sport.

Amarasuriya’s efforts to bring in teams like Australia, India and Pakistan to play in Sri Lanka limited overs competitions in the mid 1990s helped to take the sport to the grassroots levels with games being played in floodlit grounds and coloured clothing. He ventured unchartered territories too organizing a  triangular tournament involving India, Sri Lanka and Pakistan in Singapore. Amarasuriya was to Sri Lanka what Kerry Packer was to Australia.

He officiated in Sri Lanka’s inaugural Test match and was the first Sri Lankan to be drafted into the ICC International Panel of Umpires and stood in 25 Tests and two World Cups – 1996 and  1999.

While Francis was a super umpire, he was one of the first five Directors of Sri Lanka Cricket.  In the year 2000, the functions of SLC were divided into five areas – operations, development, coaching, marketing and umpiring. Francis was put in charge of the latter and with the interest for the game going through the roof, he went around the country conducting seminars for umpires and recruiting new ones to cater to the rising high demand. All leading umpires in the modern day consider Francis as their mentor.

With Sri Lanka winning the hosting rights of the 1996 World Cup, the board was struggling to make ends meet as this event was going to cost them an arm and a leg.

One of the urgent needs of the board at that time was a gymnasium. Nigel Kerner, had come down to Colombo for a brief visit from England and while visiting the Cricket Board asked officials if he could be of any assistance. The board then informed him of a need for a gymnasium. Kerner agreed to donate the money needed for the state of the art gym but on one condition. That his name should not be mentioned anywhere. More than 25 years later, the Board revealed the name of the person who donated the gymnasium and nobody, not even the players, had a clue until then. It was a secret kept by the  Board President and Secretary until recently.

Cricket fans overseas may not know some of the current players but you can be assured that one man that they will remember is Percy Abeysekara.

Uncle Percy has travelled the world on his savings supporting the national cricket team for over half a century now. A former cricketer himself, he is well aware of the challenges and intricacies of the game. Excellent knowledge coupled with his wit and command of the language has made him a popular figure among cricket players here and overseas. Ravi Shastri once said, ‘Percy, don’t ever lose your voice. Sri Lanka needs it more than you.’

Once Percy was arrested in Australia as in his enthusiasm, he crossed the boundary rope, an offence in Australia for unauthorized persons. But he dazzled the cops with his funny stories and in the end they didn’t charge him. Police officers were seen taking photographs with him in the pre-selfie era.

The father figure of cricket coaching, he has shaped the careers of many Sri Lankan cricketers. Most notably he was the first cricket coach of two former Sri Lanka  captains – Arjuna Ranatunga and Mahela Jayawardene.

Mendis did not just coach cricket. He coached life; how to conduct yourself on and off the field, your public image, your dress code and so on. Dissent never existed in his vocabulary and it was drilled into his players to accept the umpire’s verdict. Men of his caliber are a rare breed and it is reflected in his players like Arjuna and Mahela.