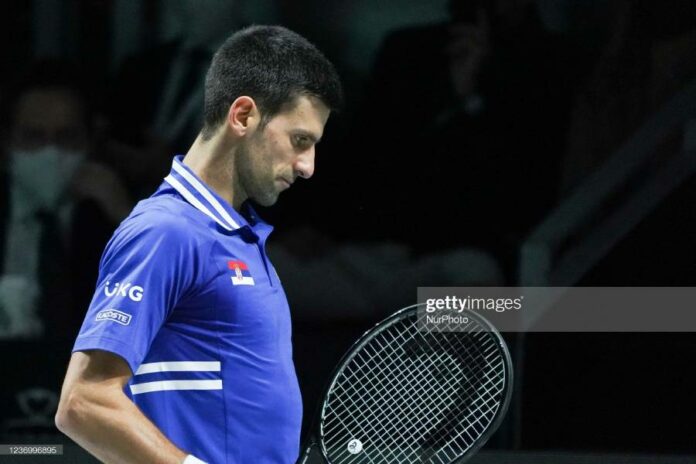 Tennis star Novak Djokovic has had his visa to enter Australia dramatically revoked on his arrival in Melbourne.

The world number one was held in the city’s airport for several hours before border forces announced he had not met entry rules and would be deported.

He has reportedly now been taken to a government detention hotel pending his departure on an outbound flight.

The developments come amid a backlash over a vaccine exemption Djokovic said he got to play in the Australian Open.

Djokovic has not spoken about his vaccination status, but last year he said he was “opposed to vaccination”.

Tennis Australia confirmed a medical exemption had been granted for the player “following a rigorous review process involving two separate independent panels” but problems emerged after Djokovic arrived in Melbourne late on Wednesday from Dubai.

In a statement, the Australian Border Force said Djokovic “failed to provide appropriate evidence to meet the entry requirements to Australia, and his visa has been subsequently cancelled.

“Non-citizens who do not hold a valid visa on entry or who have had their visa cancelled will be detained and removed from Australia,” it added.

Victoria’s acting sports minister tweeted that the state had declined to support his visa application amid the confusion.

Australia’s Prime Minister Scott Morrison has denied Djokovic is being singled out and said no-one was above the country’s rules. At a press conference on Thursday, Mr Morrison said he had been advised that a medical exemption was not in place for the player’s entry and said the evidence provided was “found to be insufficient”.

Local reports suggest Djokovic could pursue a legal appeal or apply for a new visa so he can re-enter and play in the tournament.

Reuters reports he was later taken from the airport to a hotel in the Melbourne suburb of Carlton which is used for immigration detention. The facility has been the site of Covid-19 outbreaks and a recent fire, according to local media.

Australian Health Minister Greg Hunt earlier described Djokovic’s treatment as “tough” but “fair” and said “it’s one rule for all under this Australian government”.

But the tennis star’s treatment has provoked outrage in his native Serbia. His father, Srdjan Djokovic, said his son had been held in a room guarded by police at the airport.

“This is not just a fight for Novak, but a fight for the whole world,” he said in a statement released to the media.

President Aleksander Vucic said the star was a victim of “harassment” and said that “the whole of Serbia” supported him.

Australia is seeing tens of thousands of Covid-19 cases for the first time after enduring some of the world’s strictest restrictions. More than 90% of Australia’s over-16 population is fully vaccinated, but some people still cannot travel interstate or globally because of current measures.

Many Australians had previously accused the government of allowing the rich and famous to do as they please while ordinary people remained separated from sick and dying loved ones.

The Australian Open begins on 17 January in Melbourne. Djokovic has previously won the tournament nine times.

“Rules are rules,” the PM says, about Novak Djokovic being deported.

Scott Morrison is back to talking tough but so far he hasn’t explained or answered the glaring questions at the heart of this story.

What is the issue with Djokovic’s visa? What’s the medical reason for his exemption?

And why had he been given the green light to fly and take part in the Australian Open if there are issues with his visa application? Big enough issues, it seems, for the player to get deported.

Remember, while his vaccine exemption has caused a great deal of anger among Australians – who for months now have been urged to get the jab – Djokovic is not the only player who was granted one.

Tennis Australia said that a handful of the 26 athletes who applied were given an exemption. Who are they? Why are their cases different from Djokovic’s?

There also seems to be a clear disconnect between federal and state government decisions.

The state of Victoria had approved Djokovic to compete in a tournament he’s dominated and to defend his title.

On Wednesday, Mr Morrison said it was Victoria’s decision to make. But less than a day later he has changed course to say no-one is above the rules.

This decision has sparked anger overseas but the PM is hoping the decision will go down well among Australians.

Mr Morrison has been under immense political pressure over his government’s handling of the Omicron variant, amid rocketing numbers of cases and chaos at testing clinics. All with a looming election in the next few months.