After three years, Sri Lanka and New Zealand will be facing each other in a bilateral Test series, which will commence on 15th December 2018 at Basin Reserve, Wellington. New Zealand has not been the best hunting ground for the Lions and it will be a crucial essay for the young side with a perfect opportunity to prove themselves in unfamiliar conditions. With a tough tour for the Lions around the corner, let’s take a closer look at the numbers between the two sides.

The first ever Test match between the two teams was played in 1983 at Christchurch. The home team was led by Geoff Howarth, while the newly born Test nation was captained by D.S De Silva. For only the third time in Test history (after WG & EM Grace, Hanif & Sadiq Mohammad), a pair of brothers opened the batting in a match. This rare distinction was savoured by Sidath and Mithra Wettimuny. Besides that, a staggering 7 debutants were fielded by Sri Lanka, namely, Guy de Alwis, Susil Fernando, Yohan Goonasekera, Sridharan Jeganathan, Vinothen John, Rumesh Ratnayake and Mithra Wettimuny. For New Zealand, Jeff Crowe made his debut. New Zealand comfortably won the inaugural match by an innings and 25 runs.

Sri Lanka’s first win against New Zealand came in 1992 at the SSC, where the Lions won by 9 wickets. Arjuna Ranatunga led the home team while Martin Crowe led the Kiwis. Three years later, a memorable moment was relished by the Lions as their first ever Test victory away from home was registered against New Zealand at Napier in 1995. Sri Lanka won by 241 runs, where Chaminda Vaas was named Man of the Match for his 10 scalps. Wicketkeeper and debutant, Chamara Dunusinghe made 91 in the second essay and took 7 dismissals during the Test.

Recap of the past decade

In 2005, the Sri Lankans travelled to New Zealand and the 2 match series was won by the Kiwis 1-0. During the following year’s visit to New Zealand, Sri Lanka managed to win the Wellington Test which is also their last win in New Zealand. The series ended 1-1. 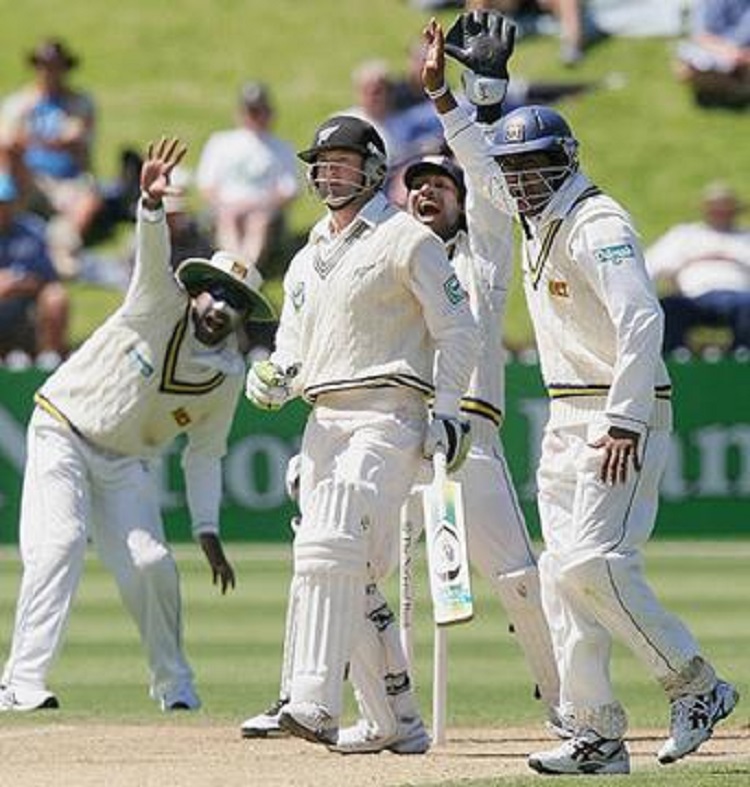 The Lions welcomed the visitors in 2009, where the hosts dominated the Test series by whitewashing New Zealand 2-0. In 2012, the Black Caps toured Sri Lanka again and this time the series resulted in a 1-1 stalemate following New Zealand’s victory at P.Sara Oval in the second Test.

The two sides met in 2014 in a series where New Zealand’s supremacy reigned on home soil. The Kiwis defeated Sri Lanka in both Tests at Christchurch and Wellington by 8 wickets and 193 runs respectively. In 2015 too, the Sri Lankans were whitewashed 2-0 by the hosts at Dunedin and Hamilton.

To review or not to review; Sri Lanka’s dilemma

Since their inaugural Test in 1983, Sri Lanka has played the Black Caps 15 times in New Zealand.

The oldest Test venue in New Zealand, the picturesque Basin Reserve has been hosting Tests since 1930. The venue was well remembered for Martin Crowe (299) and Andrew Jones’ (186) 467-run stand that shattered the Test record books for the highest partnership in 1991.

Sri Lanka have faced New Zealand in 5 Tests at the venue, winning once and losing in three Tests.

The Hagley Oval hosted its debut Test in 2014 between New Zealand and Sri Lanka in a match New Zealand won by 8 wickets. It is the only Test Sri Lanka have played at the venue.