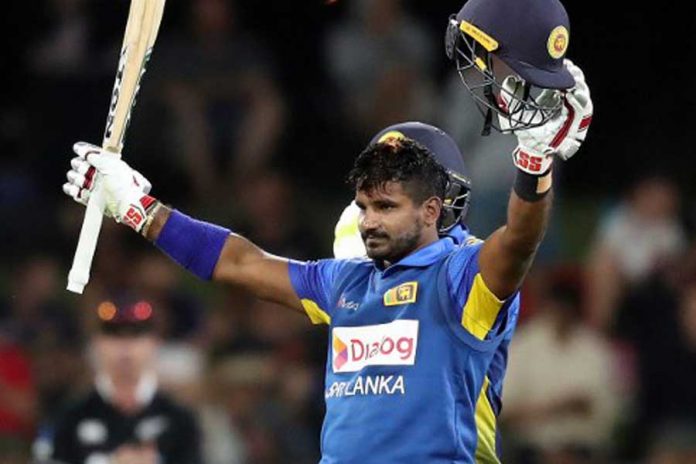 New Zealand held their nerve to register a thrilling 45-run win over Sri Lanka in the 1st ODI of the 3-match series to go up 1-0. The match was played at the Bay Oval in Mount Maunganui.

Following the heavy drubbing in the 2nd Test against New Zeland..

New Zealand captain Kane Williamson, after winning the toss, elected to bat first on a pitch which had a good grass covering on it. The hosts fielded a XI sans Tim Southee and handed a debut to wicketkeeper Tim Seifter. On the other hand the tourists surprisingly named a XI with two spinners.

New Zealand’s big-hitting openers, Colin Munro and Martin Guptill were separated in the 5th over by Sri Lanka’s captain Lasith Malinga as he deceived the left-handed Munro with an off cutter; the catch was taken by Lakshan Sandakan fielding at point off.

Following the early wicket, it was all about the Guptill-Williamson show at the Bay Oval. The first 9 overs of seam bowled by the Malinga-Pradeep-Thisara combination went for 56 runs with a run-rate above 6.

The introduction of spin slowed down the scoring rate of the free-flowing duo. In the meantime, Guptill reached his fifty with a beautiful six over extra-cover to Seekkuge Prasanna.

Malinga kept rotating his options in a quest to break the partnership. Tt was Nuwan Pradeep who finally did so, breaking the 163-run partnership with the wicket of Kane Williamson who nicked the ball onto the stumps. Willamson scored 76 runs.

Ross Taylor then came in and accelerated the scoring rate with Guptill who reached his 14th ODI century with a similar shot to what brought him his fifty to the same bowler, Prasanna.

The Guptill show eventually came to an end as Thisara Perera managed to get a leading edge off Guptill’s bat which was taken by Sandakan. Guptill had scored 138 runs in 139 balls with 11 boundaries and 5 sixes.

Taylor who further accelerated after Guptill’s dismissal reached his fifty in just 34 deliveries and was soon dismissed for 54 runs as Thisara’s second victim.

New Zealand were on 298/4 after the 45th over and were aiming at something close to 350. As the final 5 overs began the Sri Lankan fielders started flopping seriously. The first error was by Sandakan who dropped a sitter off Malinga’s bowling to give Nicholls a second chance.

The ground fielding was just poor and New Zealand who pounced on it, scored freely. Henry Nicholls and debutant Tim Seifter were dismissed for 15 and 11; Nicholls was run out while Seifter was dimissed by Malinga.

Read: ‘Time to rebuild is over’ – Malinga gears up for World Cup year

Cometh the 49th over it was time for the Jimmy Neesham show. Thisara Perera was hit for 34 runs by Neesham in an over which included 5 sixes. Thisara had given away 46 runs in the 9 overs he had bowled until then.

The last over bowled by Nuwan Pradeep went for 15 as Neesham hit another six in that over too, this time on the off with a cut.

The situation demanded a good opening partnership by the Lankan pair of Niroshan Dickwella and Danushka Gunathilaka and they delivered with their 3rd century stand for the opening wicket.

Dickwella playing the aggressive role went on his merry way, playing all kinds of scoops, from which some brought boundaries. Gunathilake on the hand supported Dickwella, playing second fiddle.

Lockie Ferguson was bowling with some steam, clocking 148 kmph at his quickest. Matt Henry was also bowling with pace but this helped the Lankan batsmen showing how good the track was to bat on.

Dickwella who missed a century in the last ODI he played by 4 runs would be livid about missing out here too. He chopped on a Neesham delivery for 76 runs, just a few deliveries after Gunathilaka was caught down the leg side by debutant wicket keeper Seifter.

Kusal Perera who came to bat at 3 added 52 runs for the 3rd wicket together with Kusal Mendis, re-building the Lankan innings which took a hit with 2 quick wickets. Kusal Perera was the aggressor in the partnership as he maintained the run rate between 7 and 8.

The highlight of the partnership was the running between the wickets. It was risky at times but the pair got away with some very close chances which the Blackcaps couldn’t pounce on.

Ish Sodhi was then rewarded for his disciplined bowling with Kusal Mendis’ wicket caught by the keeper. Former captain Dinesh Chandimal then came in and found himself struggling to rotate the strike.

His struggle came to an end when he mistimed a short delivery straight to Ross Taylor, giving Neesham his 3rd wicket. Taylor meanwhile went past Stephen Fleming as the player with the highest number of catches in ODIs for New Zealand.

Asela Gunaratne in his return match struggled, facing 23 balls for just 11 runs. He fell as Sodhi’s 2nd victim when he was caught at deep mid-wicket trying to clear the rope with a slog sweep.

Sri Lanka would have been hoping that Thisara Perera could score all the runs he gave away in the death when he walked in to bat in the 43rd over. But it wasn’t to be as he survived just 5 balls before he skied one to backward point for just 4 runs.

Sri Lanka were still in the game with an outside chance as Kusal Perera was stroking the ball so sweetly, despite wickets falling in the other end. The short ball tactic used by the Kiwi bowlers to most of the Lankan batsmen seemed to be of no use for Perera as he was always successful pulling the short ball.

Unfortunately he also threw his wicket away just as he reached his 4th ODI century. His dismissal shut the door on Sri Lanka’s chances of winning the match.

Sri Lanka’s tail somehow managed to take Sri Lanka from 298 to 326 before the innings came to an end.

Sri Lanka fell short by 45 runs but will be somewhat satisfied with the batting performance. The two teams will now meet at the same venue for another day/night encounter on the 5th of January.