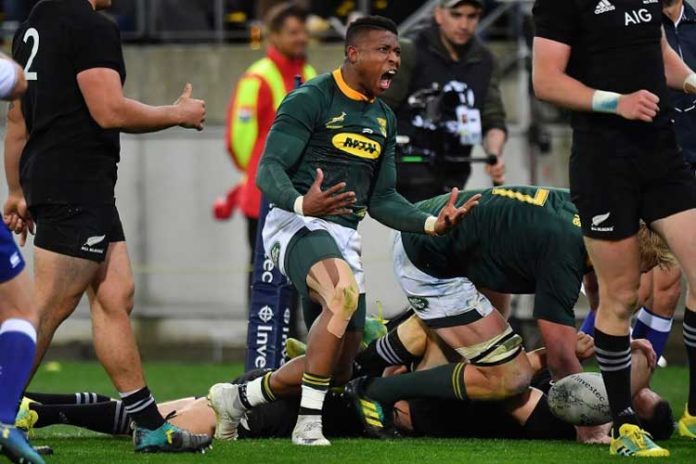 Above were some of the statements being made, following the opening rounds of the Rugby Championship (RC). And given the form books, they were all logical exclamations. But the great sport of rugby never fails to serve up a wonder when you least expect it.

Just the week before, Rassie Erasmus cut a forlorn figure after his side was undone by a more resilient home team in Brisbane, in what was a largely tasteless arm-wrestle.  That meant two defeats on the bounce, both of which Erasmus would have expected to win. The pressure was on, and I’m sure there would have been a semblance of imagining the worse when the All Blacks surged 12-00 ahead inside the first quarter. But from then on they did well to string a few phases together. The ball swiftly went through the hands for Aphiwe Dyantyi to open the Bok scoring. Then a moment of panic saw Jordie Barrett attempt an unnecessary high-risk quick throw-in which just sat up for Willie Le Roux to pluck out and score himself. Malcolm Marx then bulldozed over the line off a well-executed maul, before Handre Pollard kicked over a penalty after the buzzer to give the visitors an astounding and well derived 24-17 lead at the short whistle.

It was game on!

It was already a vastly improved performance by South Africa. The question was, for how long could they sustain it? Particularly in the face of a New Zealand backlash. A crucial moment in the game came just two minutes into the second period, when former sevens’ speedster Cheslin Kolbe intercepted an All Blacks backline play to speed away unchallenged. Pollard converted to put some daylight between the Boks and the home team. Leading 31-17 now, you could see the belief begin to swell up in the South Africans.

The All Blacks hit back through a Reiko Ioane score, his second for the game, before Dyantyi once again finished brilliantly on the left flank. But New Zealand just kept piling on the pressure. Wave after wave. The Bok defense eventually gave in when Codie Taylor scored off a forwards rush. And then in the 74th minute, Ardie Savea went through the middle of a rolling maul to touch down in what was a pivotal score. That left Beauden Barret with a very kickable conversation to tie the scores up at 36-all. But his miserable night off the tee continued as he failed to navigate his kick through the sticks. With just about 3-4 minutes remaining it was the home team in the ascendency. The game there to be stolen at the death, like they’ve done time and time before. But you could see how much this meant for the Boks, who were also bolstered by the return of Le Roux from the naughty chair for the closing minutes. It was body on-the-line stuff, where they defended like Trojans. The ball went out to the backs one last time, but the rush defense caused McKenzie to cough it up. It was done. South Africa had beaten the All Blacks, in New Zealand –  for the first time, since 2009!

The post-match statistics were heavily in favour of the home team. They even scored six tries – one more than the Boks did. But the fact that South Africa scored five tries despite being restricted to just 25% possession, and 27% territory is simply mind-boggling. And when you have so little of the ball, it means that you’re going to have to do a lot of tackling. The All Blacks made a total of 63 tackles during the game. The men in green made a staggering 235 tackles – nearly four times as many! With those stats, and to come up on the winning side, that screams resilience, especially given the poor form they showed in the lead up to the game. There’s no undermining the significance of that win. They will now have the weight of the nations behind them, as they will now enjoy a telling advantage of playing their last two games in their own backyard.

I believe that game answered a lot of questions for Erasmus. Hendre Pollard has surely made the number ‘10’ jersey his own, despite making a few errors. He is just so assured, and stands up in defense when it matters. I have never thought much of Elton Jantjies as test Fly-Half. But bringing him on in that last quarter to play alongside Pollard proved to be a masterstroke. They have also unearthed some real gems. We have already spoken about Dyantyi, who I believe is the next Bryan Habana for the Boks. He probably can even go on to be better. Stephen Kitshoff is growing to be a world class operator at loosehead prop. We all know what Malcolm Marx can do, but the performance of Warren Whitely also deserves special mention. He came across to me as a ‘ball-in-hand’ kind of player when I saw him in Super Rugby. But the way he defended was hugely impressive. He is going to give the Boks management some real selection headaches when Duane Vermeulen returns to the fold.

You never write off South Africa. If you look back to the last World Cup in 2015, many still associate that Springbok team as the one that embarrassingly lost to minnows Japan during the group stage. Yes, that was a big low, but that very same side went right up to the semifinals, only to fall agonizingly close to beating the All Blacks. 15-12 is, I believe, how that ended. On a different day, they well may have upset them.

Over to the All Blacks.

Having such a rich pool of resources in terms of talent is undoubtedly a blessing. Few could hold it against Steve Hansen for changing his team around against Argentina the previous week. After all, the World Cup is barely a year away, and it’s vital to blood in new talent to ensure the bench strength remains strong. What’s more, some of the new players – Shannon Frizell, in particular, showed that he has what it takes on the international stage. But when you chop and change a side, be it injury-enforced in some cases, it does tend to disrupt the rhythm. There were clearly signs of this during this game, which was riddled by many uncharacteristic errors. For example, I counted three or four occasions where the All Black player in possession was bundled into touch – that is a rarity.

Then, as the game moved along it was evident that the Kiwis were intent on playing at a high tempo – and quite rightly too, given they were playing a bigger, more direct opposition. But the thing with that approach is, there’s a very thin line between playing high-tempo and being rash. Of the five tries the Boks scored, two of them were effectively gifted to them. The first was the unnecessary quick-throw in that came unstuck that led to the Le Roux score. The second was when Kolbe intercepted a speculative pass just after the break, which was a crucial moment in the game. Both errors shifted the momentum in favour of the Boks, and more importantly gave them belief. This is likely to be an aspect of the game to be addressed by the management and player group.

The debate: Barrett vs Mo’unga, Smith vs TJ

No matter how successful you’ve been, a defeat brings about questions. Many of which evolves around personnel and positions.

Beauden Barrett, despite being a two-time World Rugby Player of the Year winner has always had his critics. More so after Richie Mo’unga had a stellar Super Rugby season for the Crusaders. Much of the criticism has been around his distribution skills, and his consistency off the tee. But often, when donning a black jersey, Barrett has silenced all that negativity by some jaw dropping moments of inspired brilliance. He is just that kind of player. He started this game with a sublime pop pass to send his brother Jordie slicing through the defense to score virtually untouched. But unfortunately, he seemed to have left his kicking boots at home. Mathematically, his missed kicks proved to be a telling factor on the score line. But as Steve Hansen correctly stated at the post-match interview, Barrett was not the reason they lost. The purist would feel that Mo’unga is the more rounded Fly-Half – his ability to put people in space, and his passing game in general. I would tend to subscribe to that theory too. Mo’unga would probably walk into any, if not most, top tier international sides. But Barrett has that ‘X-factor’, that special touch – the ability to make something out of nothing. For me, that makes it impossible to see past him. I would still pick him any day of the week.

The other talking point is at Half-Back. There are some ‘experts’ who are of the opinion that TJ Perenara is a better fit to Aaron Smith. This is on account of TJ being a stronger defender, and his support running lines being superior to that of Smith. On both counts, I would tend to agree. But the fundamental, and most important skill of a ‘9’, is the service you provide. Off the set piece, as well as the breakdown. In terms of passing speed and accuracy – there is no one better in world rugby than Aaron Smith. What many haven’t quite realized is, it this very skill exercised by Smith that gives Barrett that extra millisecond to weave his magic at first receiver. Yes, in this game, the All Blacks collectively came up short. But they are still the best in the world by some distance, much of which is attributed to the Smith-Barrett axis.

Could the Boks seize the opportunity?

The loss will no doubt have hurt the All Blacks. But you learn more in defeat than in victory. Looking ahead, this blip might be just what they needed to tighten things up and refocus.

We now go into the final two rounds of the Rugby Championship. The All Blacks travel to Buenos Aires to face an in-form Pumas outfit, whilst the Boks host a wounded Wallabies team in Port Elizabeth. Both teams can expect tough outings and will have to play well to win. But win, they should. And if all goes to plan, it would set up a winner-takes-all game in Pretoria in a fortnight’s times. What a finale that would be.

Rugby is a funny like that. One moment you are down and out. But if you guts it out and come through the storm, possibilities open up for you. From being at the bottom of the log, the Boks now have a very real chance of usurping the All Blacks to the crown. It’s all to play for!