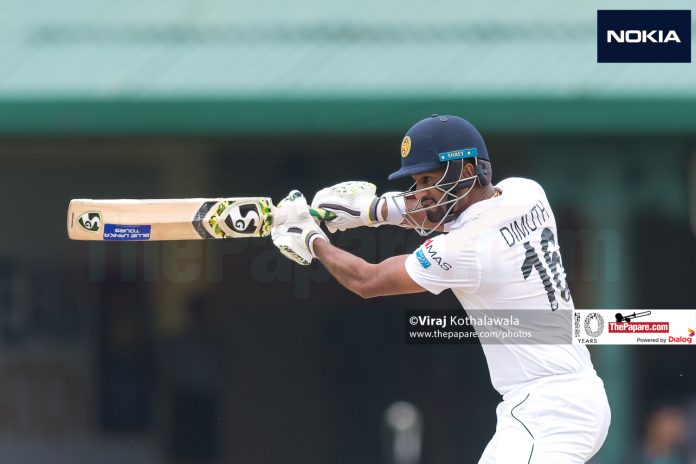 Sri Lanka Skipper Dimuth Karunaratne made an unbeaten 49 on day 1 of the 2nd ICC Test Championship game between Sri Lanka and New Zealand at the P Sara Oval in Colombo as Sri Lanka ended the rain-curtailed day on 85/2.

Heavy rain overnight and incessant showers on match-day forced officials to delay the start of the game by nearly 4 hours but some quick work by the ground staff and brighter weather made it possible for the Umpires to schedule a 1.40pm start.

Karunaratne won the toss for the hosts and had no hesitation in batting first, despite the cloudy, damp conditions. Both he and opening partner Lahiru Thirimanne started cautiously before the latter was dismissed by the off-spinner Will Somerville midway through the session.

Karunaratne and Mendis both had their fair share of luck as edges found their way to the boundary through New Zealand’s slip cordon early in the innings, however, with the spinners coming on to bowl, they settled down nicely to score at a relatively good pace throughout the hour before tea.

Somerville was the only Kiwi fortunate enough to get a wicket before the Tea break, despite some tight bowling from both Tim Southee and Trent Boult. The off-spinner broke through Sri Lanka’s opening stand, drawing a false shot from Thirimanne, who was caught by Kane Williamson at short cover.

Mendis looked fluent after some early struggles but fell to a seemingly harmless delivery from Colin de Grandhomme.

Umpires called an early end to the day at 5.03pm as the light steadily deteriorated in Colombo.