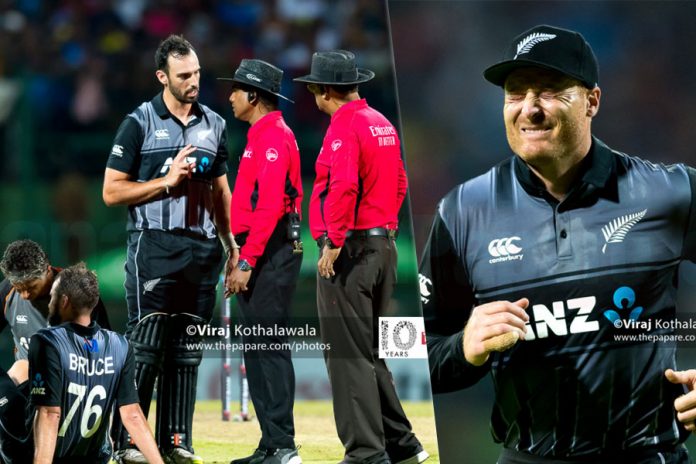 New Zealand are facing a race against time to ready a playing XI for the tour-ending final T20I against Sri Lanka at Pallekele after Martin Guptill (abdomen) and Tom Bruce (knee) became the latest victims of the injury bug during Wednesday’s second game.

Bruce, who scored a half-century, required mid-pitch medical attention for a knee problem he picked up during the course of his knock. With Guptill already rendered unable to bat in the chase with a strained stomach muscle, New Zealand’s latest concern prompted an amusing reaction from former cricketer Kyle Mills, who pretended to warm-up in the commentary box in an indication of the deepening injury crisis.

“It was full contact tonight, wasn’t it,” Bruce told Radio Sport with a laugh, after New Zealand’s series-clinching four-wicket win. “I’ll ice the knee and rest up the next couple of days. I think it should be right, fingers crossed anyway.” The team management revealed on Wednesday (September 4) morning that Bruce’s injury will be monitored in the build-up to the clash while Guptill will not take part in the tour-ending fixture with an abdominal strain.

In the wake of this injury wave, Hamish Rutherford has been added to the squad. Incidentally, Bruce was included in the playing XI for the second game only after Ross Taylor (left hip injury) was ruled out. The 35-year-old Taylor, however, has been passed fit to play on Friday. New Zealand, who decided not to seek a replacement for Lockie Ferguson (broken finger), will hope there are no other casualties in the two days heading into the contest, which could leave them with less than XI players to pick from.