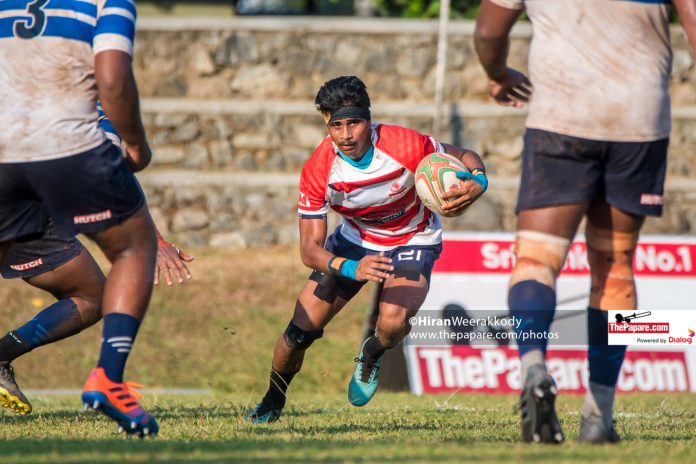 CH and FC secured a double win against Navy SC as they went on to win the game by just one point in what seemed a very tight game in Welisara. The scores read 26 points to 25 at the end of the game but surprisingly Navy were leading at half time 13-06.

The game started with Rohitha Rajapaksa kicking off proceedings and Navy were inching close to the opposition red zone with a number of penalties. Ill-discipline in the breakdown costed CH. Isuru Kongahawatte opted to go for the 3 points with a penalty in the kickable distance. (03-00)

CH had their moments but were unable to put on the finishing touches as knock-ons made them lose possession, with Navy being brought down to 14 men. Despite the good work by CH, the ball was turned over as Chathura Seneviratne made valuable yards and offloaded to his winger Sachinka Abeysekara to touch down. Kongahawatte made no mistake with the conversion. (10-00)

Kongahawatte made a brilliant penalty kick as Navy lead by 13 points to nil. It took 36 minutes for CH to put some points on the board. A stolen lineout by CH gave them a penalty and Hirusha Sampath added the 3 points. Another golden opportunity was made available for CH as another yellow card was awarded to Navy and Hirusha Sampath slotted an easy 3 pointer just before half-time.

Despite playing with a man down, Navy were attacking well in the Navy red zone and a perfect cross-kick by Kongahawatte which landed in the hands of the tall flanker Adeesha Weeratunga gave Navy a big boost as they were rewarded for their effort. However, Kongahawatte missed the conversion which hit the posts and unknowingly it proved to be a very costly miss. (18-06)

CH were playing very close and used their forwards to push the Navy defence back as their first try was scored off a very well structured set-piece with Prasath Madushka diving over. Hirusha Sampath added the extras. (18-13)

Navy were showing some excellent pace and passing, but Kongahawatte who had a brilliant first half made another costly error as his kick was charged down by the tall lock forward Matheesha Sarachchandra, who went around the post to score an unexpected but easy try. Hirusha cleared the easy 2 points and put CH in the driver’s seat. (18-20)

The second half belonged to the young fullback Hirusha Sampath, who played for Kingswood last season in schools rugby and proved a very valuable inclusion. He went onto add 3 points for a high tackle penalty by Navy and another 3 points from 40m which sealed the game for CH. (18-26)

Navy were desperately looking to score quickly in the last 10 minutes of the game and found themself hanging in the CH red zone. Stephan Gregory, squeezed his way to touch down beside the cushion and Kongahawatte took the quick conversion. Navy had one final lineout opportunity but a cardinal error made them lose possession and eventually the game as well. CH won their second game for the season and also beat Navy for the second time.