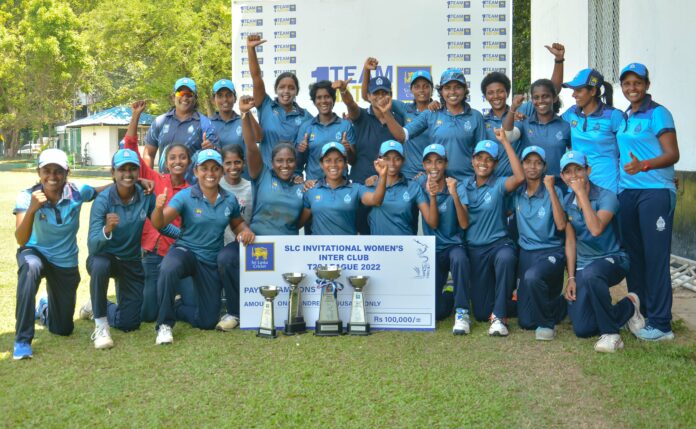 Navy Sports Club were crowned champions of the SLC Invitational Women’s Inter Club T20 League 2022 as they defeated Air Force Sports Club by 8 runs in the final of the tournament worked off today at Thurstan College Grounds in Colombo.

Navy Sports Club won the toss and chose to bat first. However, they couldn’t get off to a good start as they lost their first 3 wickets for 39 runs. Number 4 batter Hansima Karunarathna (25) and Number 5 batter Nilakshana Sadamini (21) rebuilt the inning to certain extent adding 45 runs for the 4th wicket.

Madhuri Samuddika provided the late impetus to the innings with a quick fire 23 runs off 14 balls as Navy Sports Club posted 121/6 in the allotted 20 overs. The opening batter Umesha Thimeshani top scored with a knock of 30 runs off 28 balls with 4 fours and 2 sixes.

Chasing 122 runs to win, Air Force Sports Club also struggled with the bat as they fell short of the target by 8 runs. Dilani Manodara played a fighting knock of 40 runs off 34 balls with 6 fours but it wasn’t enough to put Air Force SC over the line.

Madhuri Samuddika and Sathya Sandeepani starred with the ball for Navy SC picking up 2 wickets each.