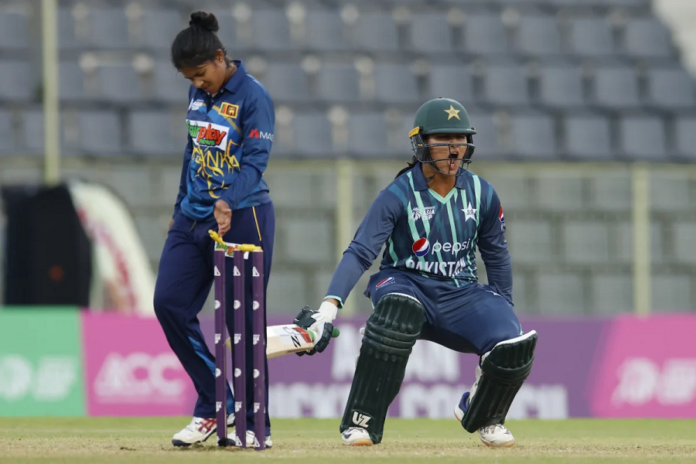 Pakistan registered a 5 wicket win in the final league game of the Women’s T20 Asia Cup 2022, beating Sri Lanka in a closely fought encounter today at the Sylhet International Cricket Stadium. The two teams who finished 2nd and 3rd respectively in the overall league table will face each other again in the 2nd semi-final of the tournament.

Both teams were guaranteed semi-final spots before the game, and therefore had no qualification pressure coming to the game. Sri Lankan Skipper Chamari Athapaththu, who has had a disappointing tournament so far, got off to a flying start after she opted to bat at the toss. Athapaththu’s quick runs ensured a good power play for Sri Lanka as they scored 47 runs in 6 overs, despite losing in-form Harshitha Samarawickrama’s wicket cheaply.

Following Athapaththu’s dismissal in the next over for a well-made 26-ball 41, it was just one-way traffic as the Pakistani bowlers ripped through Sri Lanka’s fragile batting line-up. Apart from all-rounder Oshadi Ranasinghe’s 26 down the order, only Hasini Perera and Kavisha Dilhari were able to get to double figures, scoring 18 and 11 respectively.

Pakistani all-rounder Omaima Sohail was the chief destroyer for Pakistan with her off-breaks, claiming career-best figures of 5 for 13. She in fact went past Nida Dar’s record of 5/21, which was the best bowling figures by a Pakistani bowler in Women’s T20Is. Dar herself picked up a wicket, while 21-year old leg spinner Tuba Hasan picked up 2 wickets.

The run-chase turned out to be more difficult than what the number appeared to be, as the Sri Lankan bowlers put on a valiant display of tight bowling once again. Having showcased impressive bowling performances throughout the tournament, the Lankan lasses were pretty much in the game with a good chance of winning it even until the first 3 balls of the penultimate over of the innings were bowled. However, two brave sixes from the Pakistani number 7 batter Ayesha Naseem against the bowling of Oshadi Ranasinghe sealed the game for Pakistan in style. Going for two big shots when the equation was only 12 from 9 balls was indeed a brave attempt from Naseem.

While Naseem finished the game, it was the experienced Nida Dar at the other end who remained unbeaten on 26 off 28 deliveries. She was the one who strengthened the ship for Pakistan when they were struggling at 51/4 in the 10th over, with a 45-run 5th wicket stand together with the in-form Aliya Riaz, who scored 20.

In bowling for Sri Lanka, Inoka Ranaweera once again came up with a brilliant spell, bowling her 4 overs for just 12 runs. Pacer Achini Kulasooriya was also brilliant in her 3 overs, giving away just 11 runs. Kavisha Dilhari, who picked up 2 wickets, was slightly on the expensive side with an economy of 5.33, while Sugandika Kumari was also not up to her best. Oshadi Ranasinghe was quite good until she was hit for back-to-back to sixes in the 19th over, but Chamari Athapaththu’s 16th over which gave away 12 runs, eased the pressure off the Pakistani batters, and was costly.