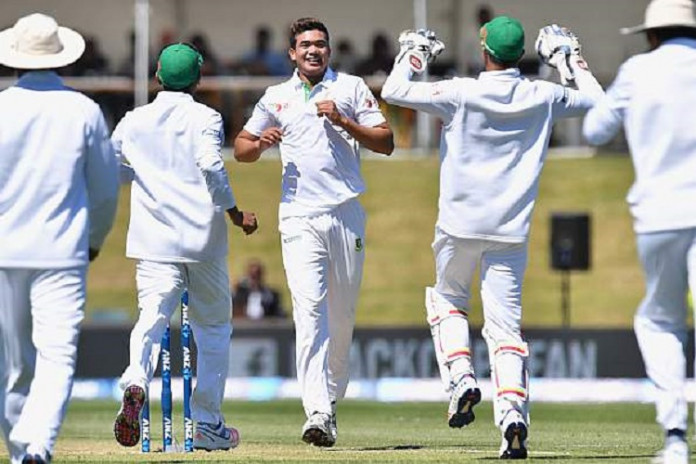 Mushfiqur Rahim believes his side is in with a chance to push Sri Lanka all the way during their forthcoming two-Test series in the island nation. The tone of pre-tour addressal was in stark contrast to that employed before the recently-concluded one-off Test against India, where the Bangladesh skipper relied on the ‘hope’ watchword.

Besides his own side’s upwardly mobile curve in the Test arena, Mushfiqur’s optimisim ahead of the Sri Lankan challenge stems from the hosts missing talisman and regular captain Angelo Mathews, who is ruled out with a hamstring injury. For the first time in Tests against their fellow Asian oponents, Mushfiqur and his men won’t have to contend with Kumar Sangakkara or Mahela Jayawardene – who have, in the past, enjoyed prolific runs against Bangladesh. The presence of Chandika Hathurasinghe (head coach) and Thilan Samaraweera (batting coach) in support staff also gives them an inside peek into their opposition’s methods and plans.

“We do have a chance in front of us,” Mushfiqur said. “If we can play our best cricket, the result will be in our favour. They are without some of the players who have been doing well for a long time, as well as their regular captain Angelo Mathews. We also have Sri Lankans in our coaching staff who can provide us with key information.

“We have been able to raise our standard of cricket. It has also contributed to the expectations placed on us. People now believe that if Bangladesh plays well, they can win against any team.”

Much of Bangladesh’s chance of upstaging their hosts will depend on an improved bowling effort. The return of Mustafizur Rahman will go someway into lending balance between their strengths in the two important disciplines. Fielding too, as Mushfiqur noted, will need a big leg up with a spate of chances being put down in their two recent series in New Zealand and India. Mushfiqur, however, believes he has an attack at his disposal that can fetch him the 20 wickets he needs for forcing Test victories.

“Our bowling unit hasn’t improved as much as our batting unit has. They are inexperienced. But they will get better by playing more and more matches. I think our fielders are also to blame for the bowlers not living up to expectations,” he said. “I believe that Mustafizur, Taskin [Ahmed], Rubel [Hossain], Subashis [Roy], [Mehedi Hasan] Miraz and Shakib Al Hasan are all capable in bringing us 20 wickets in a Test match. We are going to Sri Lanka with a strong unit.

“I must say that the opposition will feel the pressure playing against a bowling attack that has Shakib [Al Hasan], Mustafizur [Rahman] and [Mehedi Hasan] Miraz. In addition, we are going to play a third Test series in a row, in a short span of time. This will certainly be an advantage to us.”

Bangladesh begin their tour of Sri Lanka with a two-day warm-up fixture in Moratuwa. The first Test begins in Galle on March 7 with the second one, also Bangladesh’s 100th in the format, scheduled at the P.Sara Oval in Colombo from March 15. The Tests will be followed by three ODIs and two T20Is.