The Mexican rose from third to the lead during a part of the race in wet conditions after the start was delayed for an hour after a downpour of rain.

As a result, Verstappen extended his championship lead to nine points. 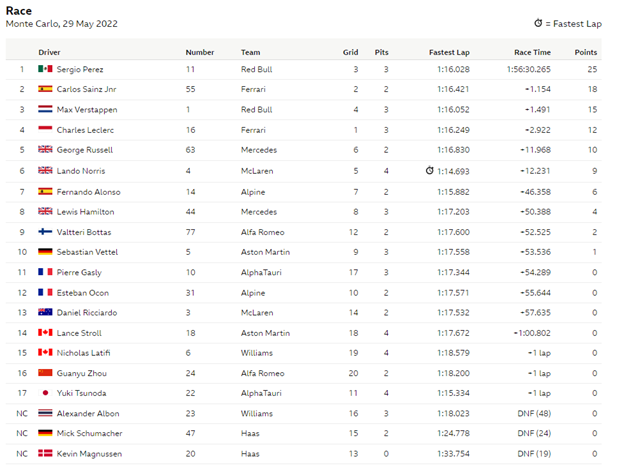 Perez, meanwhile, is only six points behind Leclerc, after a strong weekend in which he outpaced Verstappen in qualifying and drove superbly in the race to deliver on Red Bull’s improvisational strategy calls.

After the race, Ferrari lodged protests against both Perez and Verstappen on the basis that they crossed the white line on the exit of the pit lane after their second pit stops. But the protests were not upheld.

Leclerc, so outstanding in taking pole position on Saturday, was left ruing strategy blunders by Ferrari as he saw a comfortable lead turn into fourth place within the space of just four laps.

After the race was red-flagged for a second time after 30 laps because of a heavy crash by Mick Schumacher’s Haas at the Swimming Pool section of the track, Leclerc asked whether they would run to the end from their current positions.

When told they would, knowing the difficulty of overtaking in Monaco, Leclerc, voice heavy with sarcasm, said: “Oh, perfect.”

At the end, he said over the team radio: “No words. The season is long, but we cannot do that.”

The top four were nose to tail for the final 10 minutes – as the delayed race had to be called after 64 of the scheduled 77 laps because of time restrictions in the rules – but Perez held on from Sainz, Verstappen and Leclerc.

How did Red Bull do that?

When the race finally started, one hour five minutes late, it was behind the safety car for two laps, with all cars forced to be on the ‘extreme’ wet tyres, before race director Eduardo Freitas was convinced it was safe to let the cars free.

Leclerc immediately began to eke out an advantage over Sainz, Perez and Verstappen behind him and was four seconds clear of Sainz after 10 laps, and 5.3 ahead after 16, when Perez pitted for intermediate tyres.

Red Bull had taken the cue from Pierre Gasly’s Alpha Tauri, who pitted for inters shortly after the start, but was for several laps stuck behind slower cars.

Once in free air, the Frenchman started setting fastest times, proving the track was ready.

When Perez pitted, Ferrari called Sainz immediately for intermediates on the following lap, but the Spaniard refused, saying they should stay out on the wets and switch straight to dry-weather slicks.

Two laps after Perez pitted, Leclerc and Verstappen also stopped for inters, but such had been Perez’s pace, Leclerc emerged from the pits behind the Red Bull, albeit still ahead of Verstappen.

But even that was soon to change.

Three laps after stopping for intermediates, Leclerc was in again, as Ferrari pitted both cars for hard-compound slicks, bringing Sainz in from the lead and stacking Leclerc behind him.

But by the time Sainz pitted, Perez was only 3.9secs behind, so he was comfortably in the lead when Sainz re-emerged.

A lap later, Red Bull brought Verstappen in for his hard tyres, and his in lap combined with Leclerc’s struggles with tyre temperature on his out lap leapfrogged the world champion ahead into third place.

Within five laps, the race was stopped because of Schumacher’s crash. It restarted, but the result was effectively already decided.

Into the last 10 minutes, Sainz began to put heavy pressure on Perez, with Verstappen and Lerclerc right behind him, as the leader struggled with tyres he had damaged with a lock-up on the first lap after the restart, and which were also graining – suffering from surface tearing and a lack of grip.

But Monaco lived up to its reputation as a place where it is almost impossible to overtake and they stayed in line astern to the flag.

What about all the delays?

The start of the race was delayed by one hour five minutes after a downpour shortly before the scheduled start.

There were questions as to whether it could have begun in the conditions existing at the scheduled start time.

But once it had been delayed, the FIA had its hands tied, as a heavy downpour started about 15 minutes later and made the track unsafe for racing.

There were questions also as to whether the FIA waited too long to restart the race, and also whether the second red flag for Schumacher’s incident was necessary.

A two-week break before two races in quick succession – a brutal ‘double-header’, first in Baku in Azerbaijan and then Montreal in Canada.