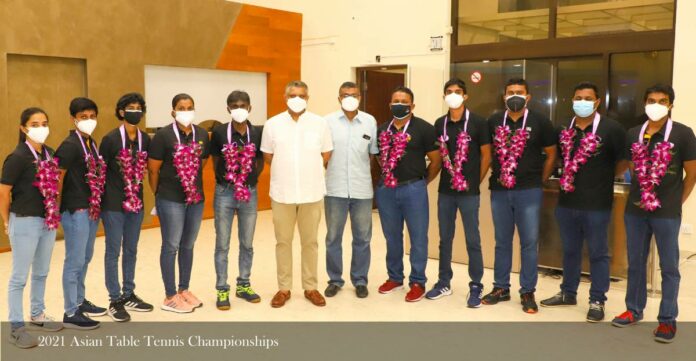 The appointment was unanimously supported by all six other nations of the region represented by Table Tennis federation officials from India, Pakistan, Bangladesh, Nepal, Maldives and Bhutan.

The regional AGM was held after the conclusion of the Asian Table Tennis Union AGM, which happened in Doha on the 3rd of October. Hon. Herath is attending the ATTU conference as a delegate representing Sri Lanka. The Sri Lanka Team too is in Doha competing in the 25th Asian Table Tennis Championships, where the team and individual performances have been very encouraging and potential of players were on display.

Hon Kanaka Herath, since resuming his role as the president of the TTASL has raised the bar in the local arena, where under his guidance many development programs have been launched. Just to name a few;

In addition, under his leadership, the TTASL is in the midst of leasing the Bandaragama Indoor Sports facility, though renovation activities were affected due to the lockdown.

As of now the TTASL has had no place to call home and have been dependent on many venue to host its tournaments and conduct senior and Junior national training. With the acquiring of the indoor sports complex, Training can continue all seven days and the standards will improve tremendously. Similarly, Hon. Herath has been successful to secure funds to build a suitable hostel facility within the premises.

Minister Herath, as the President of the South Asian Region TT Federation hopes to use his office to build stronger relationships with the countries of the region and have exchange programs for the benefit of our local junior players.

The next biggest and ambitious program is to conduct a South Asian Junior tournament in Sri Lanka for the very first time and with the acquiring of the Bandaragama Hall, this is to be a reality.

All other positions in the SARTTF were occupied by the representatives of other countries. General Secretary of the TTASL, Mr. Reza Latiff was elected into the Executive Board, where each country has one representative. All positions were elected for a period of two years till the next AGM.

Another notable factor is that she is the only player from the South Asian region to be amongst the first 16 players at this years tournament, which is packed with players from countries where they play the sport of table tennis professionally and all players are ranked in top positions in the world. Muthumali played and lost against Japanese player Hayata Hina ranked no 27 in the worldF.

In the team events both Men and Women performed tremendously well to improve the country’s ranking position by securing the 12th position in the women’s team event, whilst the Men were positioned 18th. At previous Asian Championships held in Indonesia in 2019, the Sri Lanka Women were placed 19th and the Men were in the 23rd Position.