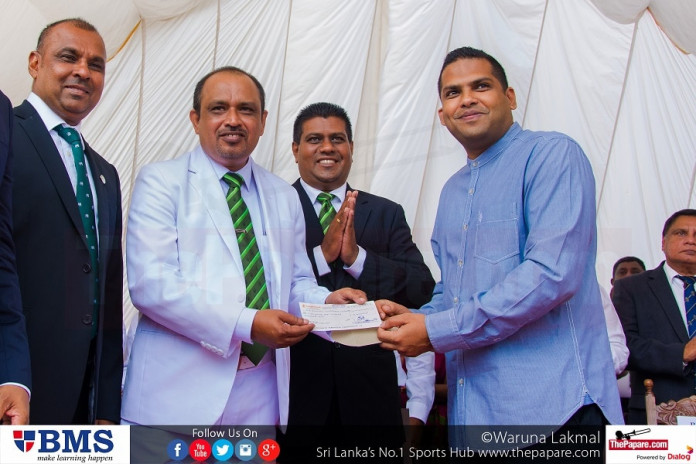 The jersey, signed by the 2015 Rugby World Cup winners, was gifted to the minister by New Zealand Rugby (NZU) when he travelled to New Zealand to discuss a prospective partnership between the two countries.

In a self-less act, the minister, instead of framing the precious jersey and hanging it up in his home, decided to lend his support to Isipathana College, a rugby powerhouse in the country, that has produced many players who have gone on to represent Sri Lanka at the highest stage. The school has done particularly well in the recent past, with the 1st XV team winning the Triple Crown in 2014, finishing in the runner-up position in all three major tournaments in 2015 and then winning the Singer League and Milo President’s Trophy in 2016 whilst emerging as runners-up in the All Island 7s tournament.

A special ceremony was held at the Isipathana Grounds earlier today in relation to this donation, where the Principal, Rugby Committee and the students of Isipathana College welcomed the Minister. Speaking to the gathering, Minister Fernando stated that Isipathana has done an immense service to mother Lanka to keep the game of rugby alive.

Minister Fernando also encouraged the students to push themselves to be the best not only in the sports field but in academics as well, reiterating the importance of achieving a balance between studies and sports. Captain of Isipathana’s Champion 2016 team, Kushan Indunil and his team were also present at the gathering alongside Asanga Senevirathne President (SLRFU), former referee Dilroy Fernando, Harsha Guneratne (Director Hela Clothing) and other distinguished guests.

Rugby lays its foundation in Kuliyapitiya