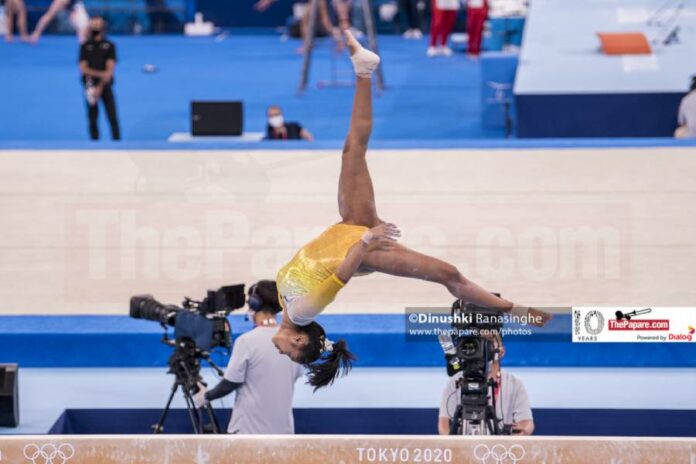 Sri Lanka’s 1st ever Olympic representative in Gymnastics Milka de Silva, managed an overall score of 45.798, finishing in 78th place in the Qualification Round of the Artistic Gymnastics Individual All-Round event.

De Silva, who featured in Subdivision 2 of the competition, started off with the Balance Beam as her 1st rotation, where she managed a score of 11.266. She followed up with a score of 10.300 on the Floor, before getting her highest score in the Vault, where her performance earned her 13.366. She scored 10.866 on the Uneven Bars.

At the completion of her 4 rotations, she stood in 28th position overall, but she fell to 78 once the entire Qualification Round, which featured 85 Gymnasts in 5 Subdivisions, was completed.

The event was dominated by the American and Russian Olympic Committee teams, with Simon Biles finishing as the top qualifier, as expected, with 57.731 points.

The Women’s Team final is scheduled for the 27th of July, with the All-Round Final set for the 29th. The apparatus finals will be held from the 1st to the 3rd of August.

*There were 5 subdivisions of gymnasts in the Qualification Round of the Women’s competition. Within each subdivision, there were 4 groups (rotations).

The top 24 gymnasts (at the end of the whole qualification round – when all 5 subdivisions had finished competing) made it through to the All-round individual finals.

The top 8 gymnasts (at the end of the whole qualification round – when all 5 subdivisions had finished competing) from each apparatus (Vault, Uneven Bars, Balance Beam, Floor), made it through to the respective apparatus finals.