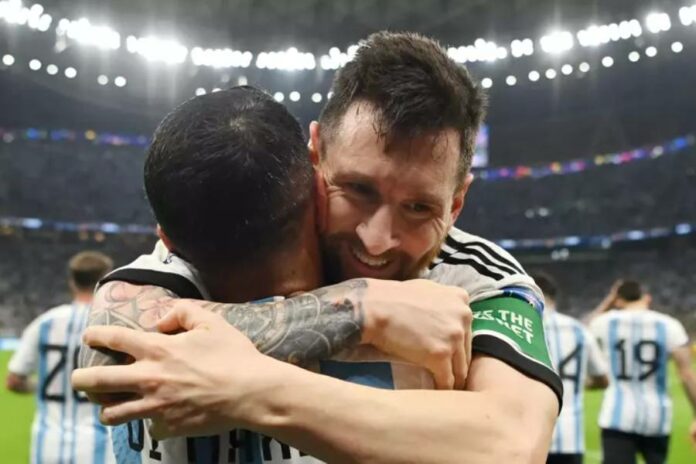 Lionel Messi inspired Argentina to a crucial victory over Mexico in Lusail Stadium to position the South Americans’ World Cup quest firmly back on track.

An edgy game featured next to no goalmouth action until Messi lit a match under the contest after 64 minutes. When the 35-year-old genius sent a 22-yard free-kick over the bar six minutes after half-time Argentina’s World Cup life was hanging in the balance.

Lionel Scaloni’s team knew defeat would spell the end of the road in Qatar following a shock opening loss to Saudi Arabia. But Messi gathered Angel Di Maria’s pass to fire unerringly into the bottom corner from outside the area.

Enzo Fernandez, on as a second-half substitute, quashed any lingering anxiety when he strode into the box following a short corner to curl beyond goalkeeper Guillermo Ochoa and start an Argentinian party at the scene of their Saudi-inflicted desolation only four days ago.

Argentina appeared lethargic and short on invention for the opening hour of a game they didn’t dare lose. Even the incomparable Messi was labouring, trundling on the periphery and comprehensively clearing the bar with his one dead-ball opportunity soon after the restart.

It’s the quiet ones you have to watch, goes the saying. And it never pays to take your eyes off Messi, regardless. Sure enough, the Paris Saint-Germain player evoked memories of his tremendous last-ditch strike to defeat IR Iran in Argentina’s second group game of Brazil 2014 when he took charge of his team’s destiny at this competition.

The assist was supplied by another Argentina stalwart in the 126-cap Di Maria. Messi controlled the pass from his long-time oppo, roughly 22 yards from goal. Mexico, perhaps not fully switched on to the danger, were slow to close the seven-times FIFA Ballon d’Or winner and how they will regret their hesitation.

Ochoa was hitherto unbeaten in Qatar. The strike, then, needed to be true and accurate – and Messi’s crisp shot met both criteria, scooting inside Ochoa’s left post. The unthinkable prospect of Messi’s attempt to win a first World Cup going south after two matches was banished with one swipe of the most famous left foot on the planet.

The combined total of four efforts on goal in the first half was the lowest in a World Cup game since Netherlands v Argentina in 2014 (three). That match went to penalties.

When you score your first #FIFAWorldCup goal at 21 years old 🫶 pic.twitter.com/u0bdtxrpoo

Argentina coach Lionel Scaloni: “You know what happened The number 10 scored the goal. He did what he does best, scoring goals, supported by the whole squad and it was thrilling in every aspect.” Mexico coach Gerardo Martino, whose team need victory over Saudi Arabia on Wednesday for any chance of a last-16 spot: “As long as there is a chance we will try. Saudi Arabia need to win. So do we. They need to score. We need to score. Footballers are used to bouncing back and using all our chances. Is it difficult? Yes, the second goal of Poland against Saudi Arabia was harmful. So was Argentina’s second goal against us. “It’s difficult but there is a chance. We need a winner in the other match. And the more they score the better. That would be helpful.”

With a goal and a recording breaking assist, Lionel Messi etches his name in the history books once again. Your @Budweiser Player of the Match.

Where he walks, greatness follows.