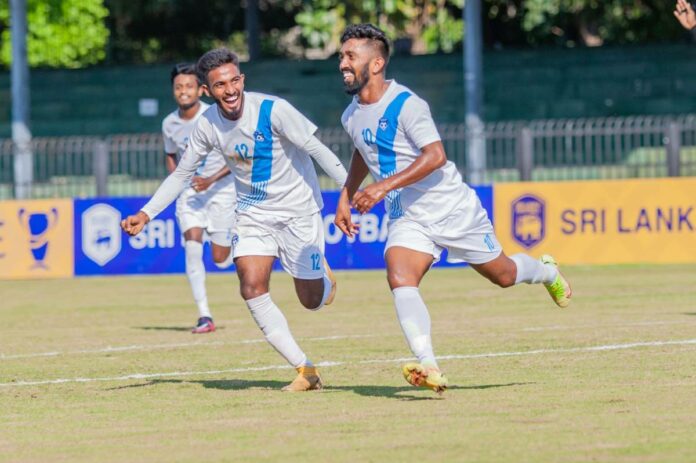 The champions from Nepal, Machhindra started off well getting a couple of free-kicks and Nurlan Novruzov narrowly missing the target. The lively Shenal Sandesh was a constant threat and he earned Blue Star a penalty in the 15th minute. Unfortunately for Blue Star, Jerry Ombebe’s penalty was brilliantly saved by Bishal Shrestha.

However, Blue Star were not deterred as they pressed for a goal. Mohamed Fazal’s quick thinking from a free-kick caught the Nepalese unaware, allowing Mohamed Ihsan to ghost through and score past Bishal in the 25th minute. Three minutes later Blue Star doubled the lead through Shenal Sandesh, scoring from a difficult angle.

It was still the hosts who had the upper hand but their execution inside the box left much to be desired and in one instance Nurlan shot straight at goalkeeper Kaveesh Fernando from point blank range. For Blue Star it was Shenal who constantly kept harassing the defense while Kaveesh pulled off a couple of saves.

Apart from an intial Prince Boadu effort which he shot straight at Bishal, the 2nd half was dominated by Machhindra. Andres Tchounkeu’s header bounced off the crossbar while Bimal Magar’s header hit the upright and the rebound was cleared off the line by Tharindu Eranga.

Captain Sujal Shreshtha missed an open header as the frustration of the hosts grew. Under contant attacks the Blue Star defense held firm while Sujal could only score a header with the last touch of the game deep into injury time.