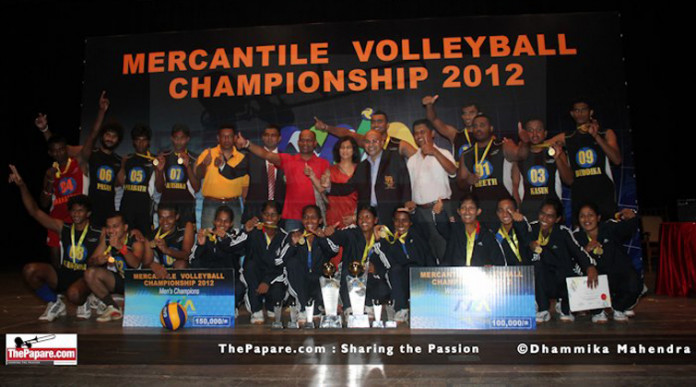 Accordingly Men’s and Women’s finals and the 3rd place play-off matches were worked off  with the support of many sponsors. The two leading garment conglomerates MAS and Brandix were set up for a head to head battle after a long tournament, the preliminaries of which were concluded previously.

The championship which was held after a lapse of 6 years after a new committee revamped the event this year.  The event was organized to promote mercantile Volleyball and the sport in general in Sri Lanka.  It was also contended that it was an opportunity to create jobs for the Volleyball players thus rendering a great service to society.

The prizes for the winners were given by Mr. Dian Gomez MD MAS Intimate and Director MAS Holdings, Mr. Dhananjaya Rajapakse CEO, Brandix Casualwear, Mr. Lalith Piyum Perera and others. The organizers indicated that the championship will be continued next year engaging many more teams and opening opportunities for the volleyball players.  The sponsors DSI, Dialog, Scan Products, Red bull and Lanka Tiles did yeoman service coming forward as sponsors of this event.