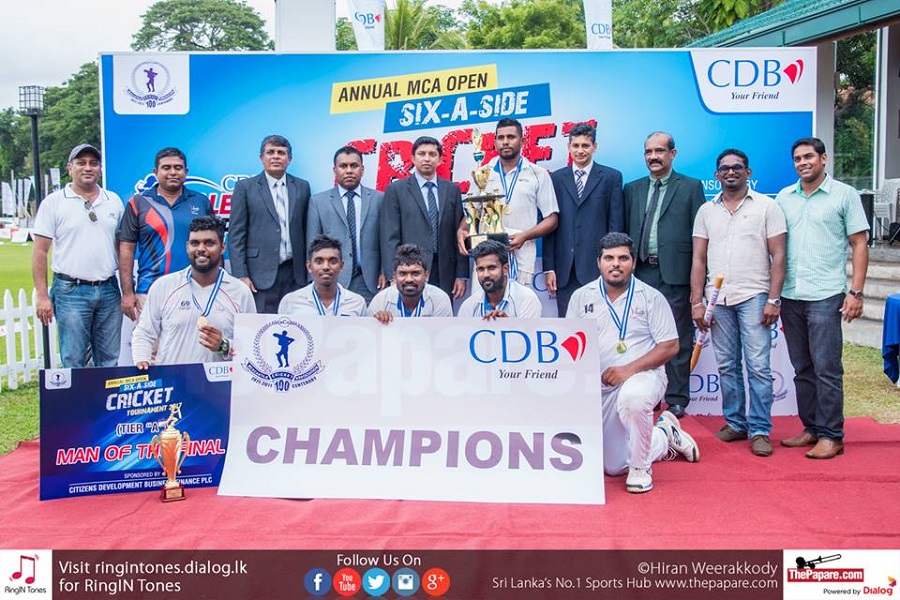 MAS Silueta “A” led by Buddhika Sanjeewa emerged champions of the MCA Tier “A” Cricket  “Sixes” 2017, as they beat their senior sister firm, MAS Unichela “A”, led by TM Dilshan, in the Final worked off at the MCA grounds in Colombo on Monday(7).

The tournament was sponsored by award winning, Non-Banking Financial Institution Entity, Citizens Development Business Finance PLC  (CDB) with 12 teams involved in the Tier “A” segment &  48 teams in Tier “B” segment; the tournament was worked off on the 5th,6th & 7th of August.

The sponsors Citizens Development Business hogged the limelight when they won the Tier “B” segment, beating Maliban Biscuits in the final, played prior to the Tier “A” final.

In the first semifinal of the tier “A” segment, MAS Silueta “A” who beat Sampath Bank “A” in the  quarter finals took on newcomers Powertek Cement who batted first and made 68 for 4 in 05 overs, with Sandakan Pathirana hitting a powerful 31 Including 03 sixes & 02 fours before he had to retire due to the tournament rule of a batsman to be retired if he reaches 31.

Chasing 69 to win Mas Silueta “A” lost a wicket in the first over before taking 18 runs in the second over to put them back on track. Dineth Thimodya bowled a tight third over for Powertek to leave the game in the balance before Silueta skipper Buddhika Sanjeewa went berserk in the fourth over hitting Sandakan Pathirana for 18 runs. Denuwan Rajakaruna put the icing on the cake making an unbeaten 30* to take Silueta into the finals with one ball to spare.

In the second semifinal, MAS Unichela “A” beat the defending champions LB Finance in a thriller of a game worked off in Moratuwa.  Unichela put up a daunting 80/1 in their 5 overs with T.M. Dilshan and his brother T.M. Sampath making 32 rtd & 26 respectively.

LB Finance got off to a great start taking 20 off Dilshan’s first over while keeping up with the required rate before they were left with 16 to get off the final over. LB Finance came ever so close but Lahiru Jayaratne held his nerve with the ball to secure a tight three run win for Unichela.

MAS Silueta “A” got off to a great start in the final thanks to a brilliant opening stand of 65 between Denuwan Rajakaruna & Kaveen De Silva who both both made 31(rtd) each, as they put up a eventually match winning 80 for 1 in their five overs.

Unichela never got going in their run chase before they eventually fell short by 12 runs handing the title to the deserving MAS Silueta “A” outfit who played consistently right throughout the tournament.

In the tier “B” final, CDB recorded a thrilling win when they chased down 63 with one ball to spare against Maliban who made 62/5 batting first. Buddika Silva was the star of the final as he picked up a crucial wicket before guiding CDB home with an unbeaten 20*.

Man of the Final – Kaveen de Silva from MAS Silueta “A”.

Man of the  tournament – Sandakan Pathirana from  Power – Tek Cement .

Most number of Sixes Scored in the tournament (13), Best Batsman & Man of the Tournament – W.P.D.P. Dharmasiri(CDB)