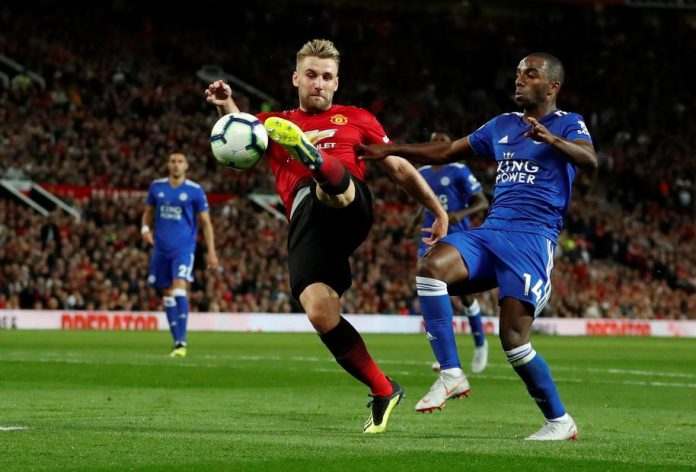 Manchester United kicked off the 2018/19 English Premier League season with a 2-1 win over Leicester City at Old Trafford.

United picked debutant Fred in the starting XI while Leicester were without their star winger Riyad Mahrez who moved to Manchester City.

Manchester United were immediately on the front foot when an Alexis Sanchez shot at goal caught the arm of Daniel Amartey in the six-yard box which saw a penalty being awarded just 72 seconds into the new season.

Captain Paul Pogba had no difficulties in converting the penalty as he sent the ball into the top right corner away from the reach of Kasper Schmeichel.

Leicester City failed to find an immediate response but as the game progressed they gained more possession and dictated the flow of the game causing problems to the United back four. On the other hand, the Red Devils were sloppy in possession and failed to create any substantial chances.

A chance for Leicester to equalise arrived when James Maddison’s shot from inside the six-yard box was smartly saved by David De Gea and Kelechi Iheanacho also found himself clean on goal but a timely tackle from Victor Lindelof prevented him from generating a shot.

Both teams shared equal possession at the start of the second half with United showing more conviction than the previous 45 minutes. Sanchez and Matteo Darmian penetrated the Leicester defence only to have their shots blocked by Schmeichel.

Leicester committed more men forward in search of an equaliser which left their defence stretched and vulnerable to United counter attacks. Unfortunately, the Reds were unable to use the ball wisely to extend their lead.

United and Leicester both played their Trump cards by bringing on Romelu Lukaku and Jamie Vardy respectively late in the game.

Subsequently Vardy won the ball on the right extreme and his cross found the head of Demarai Gray who was unable to beat De Gea at his far post.

On the other end, Juan Mata’s lobbed through ball found the full back Luke Shaw in open space, whom after a poor touch recovered by brilliantly scooping the ball past Schmeichel to make it 2–0 for United.

Jamie Vardy managed a goal in stoppage time which gave Leicester half a chance to equalise in the remaining minutes which they were unable to do as United held the fort.