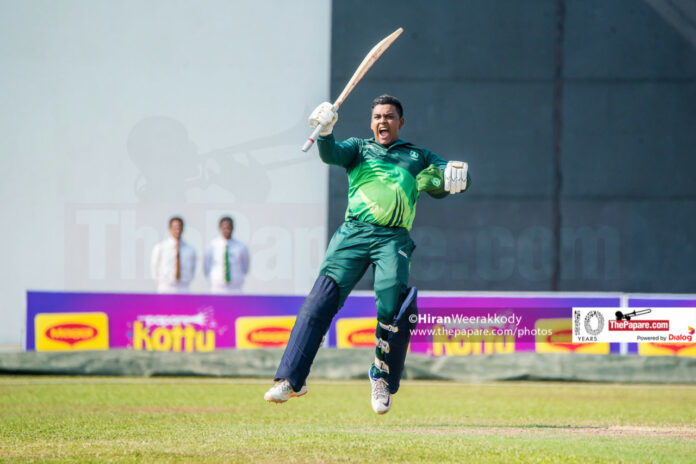 The 3rd week of the SLC Major Club Emerging 3-Day Tournament 2022 kick-started today, with 12 matches being played at different venues across Sri Lanka.

As 24 of the 26 teams that compete in 4 different groups took the field today, a total of 5 scores above hundred were recorded, including a double century, which also happens to be the 5th one of the season.

Opening the batting for Ragama CC against Badureliya CC at the Surrey Village Grounds, former Pathanian Thevindu Dickwella racked up 200 off 247 with 24 boundaries and 4 sixes, putting his team in a strong position at stumps with 324/2 on the board.

In the bowling department, a total of 6 5-wicket hauls were recorded as Kaumal Nanayakkara bagged 7 wickets for Army SC against KTC. However, Army SC themselves were reeling at 63/4 in reply to the 206 made by KTC at stumps at the Moors Grounds. Nanayakkara’s 7-wicket haul also happens to be his 3rd haul of 5 or more wickets in this tournament and the 3rd instance a bowler picked 7 wickets in an innings in this tournament.

In more standout performances of the day, former Thomian Skipper Shalin De Mel amassed 157 for Colts CC in reply to Kandy Custom CC’s 131, putting them in a very strong position at home. Ace Capital CC’s Skipper Sawan Kankanamge’s 156 opening the batting gave a strong start to their game against BRC, as they will be looking for a better result after their defeat in their previous game. Kankanamge, being a former Thurstanite, must have also enjoyed the home advantage of playing at Thurstan Grounds. Malinga Amarasinghe and Kavin Bandara also scored centuries for CCC and NCC respectively.

Bloomfield’s right-arm office Rajendran Aravinth recorded his 3rd 5-wicket haul in consecutive games as he led the charge for the visitors against Kurunegala Youth CC at the Welagedara Stadium. Former Sri Lanka U19 cap left-arm seamer Dilshan Madushanka recorded his 2nd 5-wicket haul in back-to-back games for Colts CC. While his SL U19 teammate Dilum Sudeera picked up his first 5-wicket haul of the tournament for Tamil Union C & AC, Kavindu Ediriweera and Dasun Senavirathne too picked up 5 wickets each for BRC and Chilaw Marians CC respectively.

All 12 games will continue tomorrow for the 2nd day.