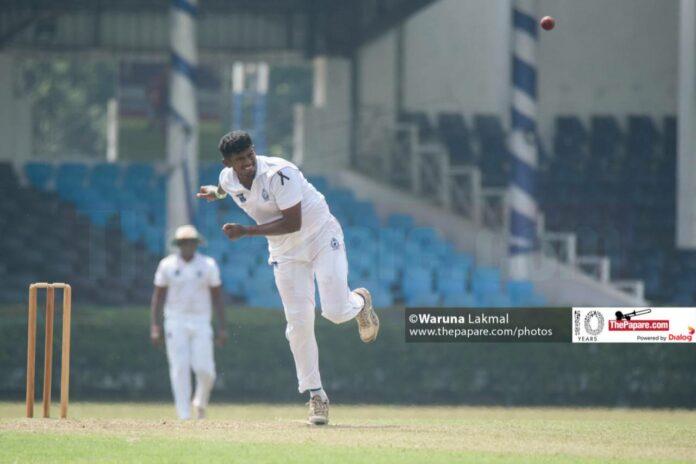 The Group C encounter between Ragama CC and Police SC which began yesterday at Police Park ended today, within just 2 days, as the home team recorded a stunning 7 wicket win despite conceding a 8-run first-inning lead. Ragama who came into the game with the expectation of strengthening their chances to qualify for the knockout stage with a win, crippled down in the 2nd innings as they were bowled out for just 84 runs. Police skipper Asel Sigera picked up 4 wickets with his left-arm spin and was well-supported by fellow left-arm spinner Dinuka Wanniarachchi who grabbed 3 wickets. Wanniarachchi also picked up a 5-wicket haul in the 1st innings. Former Anandian Sigera then sealed the game for Police with a half-century. The only positive for Ragama in this game was former Thomian skipper Dellon Peiris who claimed 6 wickets in the 1st innings.

This leaves the game between Tamil Union C & AC and Nugegoda S & WC as the only remaining game of Group C while Ragama’s defeat ensures Tamil Union a place in the Semifinals irrespective of the result of their game this week. Tamil Union were claiming more points extending their lead at the top as they ended the first day of the game with a mammoth 383/5 today at the P. Sara Oval. Opener Supun Kavinda top-scored for the hosts with 173 while skipper Ranmith Jayasena remained unbeaten on 57.

Galle CC’s right-arm off-spinner Subhanu Rajapaksa and Army SC’s in-form left-arm spinner Kaumal Nanayakkara recorded 7-wicket hauls in their encounters against Ace Capital CC and Colts CC respectively. Despite Nanayakkara’s brilliance with the ball Group D toppers Colts amassed 331 runs before removing 3 wickets of Army in their reply. However, Army will be still looking for a miraculous turnaround to defeat Colts and remain in contention for a Semifinal spot.

The wide-open Group A saw 3 exciting encounters unfolding today as Moors SC, Sebastianites C & AC and Air Force SC look for good wins against SSC, Lankan CC and Navy SC respectively to get closer towards the coveted semifinal spot. At Moors, the home team put on 292 for the 1st innings with a century from Adeesha Thilanchana and 99 from skipper Dinuka Dilshan. SSC eyeing to spoil the party for Moors were 73/2 at the close of play with Shevon Daniel unbeaten on 49. In bowling, it was SSC’s skipper Kavindu Nadeeshan who took center-stage grabbing a 5-wicket haul.

While Lanka were trailing by 102 in their quest to spoil the party for Sebastianites, Air Force were on 51/3 in reply to the 189 made by the hosts, Navy. Off-spinner Movin Subasinghe was

instrumental for Air Force with the ball as he claimed his first 5-wicket haul of the tournament after coming so close in several previous attempts.

Saracens SC amassed 353 for their first innings in the last game of Group B against Negombo CC with the help of a brilliant ton by former Sri Lanka U19 cap and Richmond College Captain Thaveesha Abhishek. However, Negombo won’t be much worried about the outcome of this game as they already have an unassailable lead over the rest of the teams in the group and are guaranteed a Semifinal spot. In bowling, Negombo’s most successful bowler thus far in the tournament, Pasindu Ushetti claimed his 2nd consecutive 6-wicket haul in the tournament.

The second day of the ongoing 8 matches will commence tomorrow.