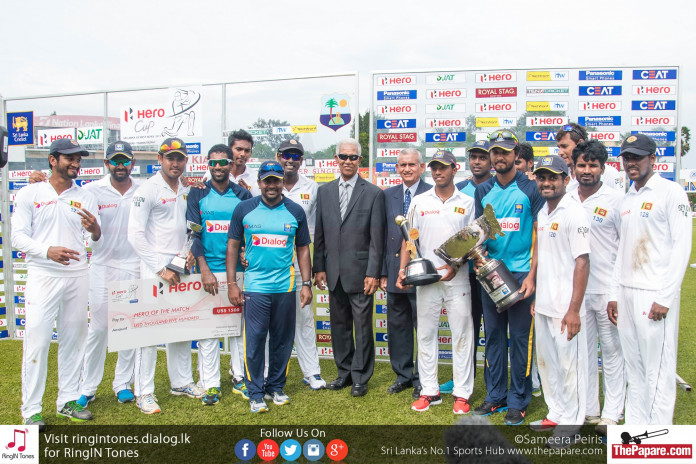 Dominant Sri Lanka defeated West Indies by 72 runs on day five in the second Test which concluded at P. Sara Oval grounds on Monday to clinch the maiden Sobers-Tissera trophy.

Left-arm spin twins, Rangana Herath and Milinda Siriwardana completely triggered a Windies collapse on the final day to turn the match in favour of Sri Lanka. This ends a trophy drought for Sri Lanka in 2015 as they won the two-match series, 2-0.

Entire day four was lost yesterday due to persistent rain and Shai Hope & Darren Bravo commenced at 20 for 1. Both overnight batsmen pounced on anything loose by the Lankans to string a superb 60-run stand for the 2nd wicket.

Siriwardana came to the attack in the 17th over of the morning and he straight away dismissed Hope for a well-made 35. Incidentally, Siriwardana has struck in his first over in 3 consecutive innings.

Experienced Marlon Samuels was dismissed for his 9th single-digit score against Sri Lanka in 17 innings when he poked and nicked to slip with Angelo Mathews completing a sharp, low catch off Dilruwan Perera.

Jermaine Blackwood was the next to be dismissed when he was trapped LBW by Siriwardana as the visitors were reeling on 112 for 4 at lunch.

Darren Bravo batted with superb authority to score his 13th half-century from 90 balls on a wearing surface but he fell in the same over alongside Denesh Ramdin to the bowling of Rangana Herath. Both were caught gleefully at first-slip by Angelo Mathews as the Windies were sinking fast.

Skipper Jason Holder played across the line to be given LBW as Siriwardana picked up his 3rd victim. None of the tail showed any resistance against the Lankan bowling attack as the Windies slumped another Test defeat.

Rangana got the better of Kemar Roach & Jerome Taylor to end the series with 15 scalps and was named the Man of the Series, “The batsmen can hit three or four sixes, I don’t mind, but we knew we had enough on the board because there was a bit in the pitch.” Rangana shared his views.

Milinda Siriwardana took 5 wickets and scored 110 runs to inspire Sri Lanka to victory and for his all-round performances he was named the Man of the Match, “I’m really proud and happy about my performance. I was just trying to bowl normally. “ Siriwardana said at the post-match ceremony.