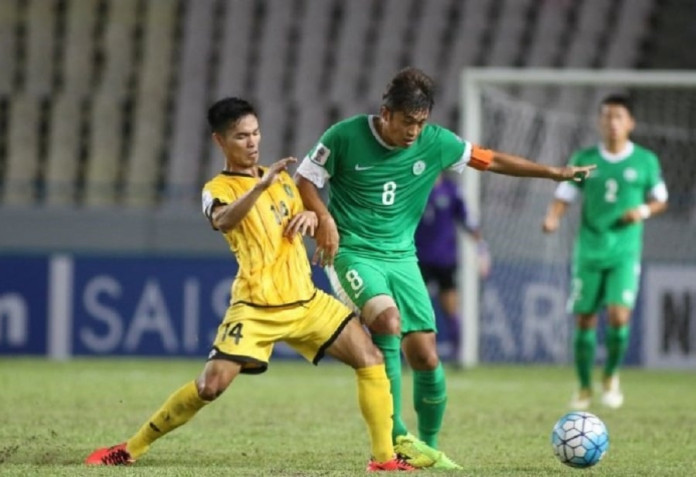 Kuching: Macau booked their place in the final of the 2016 AFC Solidarity Cup on Saturday evening with a 4-3 penalty shootout win over 10-man Brunei Darussalam following a 1-1 draw after 120 minutes of action at the Sarawak Stadium.

Goalkeeper Ho Man Fai saved spot kicks from Rosmin Kamis and Maududi Kasmi to send Macau into the deciding game on Tuesday, where they will take on Nepal, who earlier saw off Laos in a shootout of their own.

Shahrazen Said gave Brunei the 27th minute lead but Wardun Yussof’s 55th minute sending off was followed by an equaliser from Leong Ka Hang and Brunei held on to take the game through extra time and to penalties.

But the shootout turned out to be a step too far for Brunei, and Macau advanced thanks to the heroics of Ho, who kept out efforts from 12 yards in the third and fourth rounds as his side’s four penalty takers all successfully found the back of the net.

Brunei went into the game as marginal favourites and introduced Leicester City winger Faiq Bolkiah into a side that featured three alterations from the team that lost 3-0 to Nepal in their final group game while Macau made five changes from the side that drew 1-1 with Sri Lanka on Wednesday.

Despite coach Tam Iao San refreshing his line-up, there was still no recall for the tournament’s top scorer, Nicholas Torrao, who missed the previous game due to suspension but was available for selection.

Macau’s Leong Ka Hang gave Brunei a scare in the 23rd minute when he rose highest to meet Kong Cheng Hou’s cross from the left, only to head over the bar from 12 yards out, and four minutes later the South east Asian side responded by going a goal up.

A sharp burst of speed by Said took him past the Macau defence, leaving him in a solo battle with the goalkeeper, and he confidently stroked the ball into the back of the net. Two minutes later, Brunei could have doubled their lead at Bolkiah’s pace allowed him to latch on to Said’s pass, but the sent his attempt over the bar.

With eight minutes remaining in the half, Bolkiah caused more problems, weaving his way down the left wing before cutting the ball back from the bye-line towards Azwan Ali, but the Macau defence did just enough to suppress the danger.

Torrao finally made his appearance from the bench at the start of the second half and, in the 55th minute, he played a key role in pulling Macau back into the game. The Benfica de Macau striker was judged by Korea Republic referee Kim Woo-sung to have been fouled by Yussof in a goal scoring position and the Brunei goalkeeper was sent off.

Substitute Asnawi Syazni should have done better late in the game for Brunei after a fine run by Said while at the other end Leong shot just wide after turning the Brunei defence. And with five minutes remaining, Azwan Saleh’s curling free kick wide on the right thumped off the top of the crossbar.

The game went into extra time and, in the dying seconds, Bolkiah almost won the match for Brunei with a stunning solo goal, running half the length of the pitch before seeing his shot come back off the woodwork.

But it was not to be for Brunei and Ho finished the night as the hero as Macau progressed to Tuesday’s deciding game.