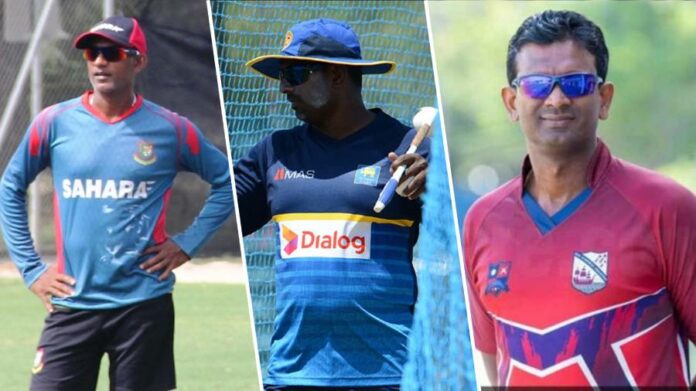 Sri Lanka Cricket needs to be commended for sticking with local coaches who have proven their mettle in domestic or school circuit over the years rather than searching for foreign coaches to fix all cricketing problems as was the case sometime back.

There are two notable appointments that are being made and you tend to get the feeling that these appointments will help the up and coming players immensely. The return of Sampath Perera augurs well for the sport as he has achieved unprecedented success with Nondescripts Cricket Club (NCC), D.S. Senanayake College and Trinity College in the recent past. The greatest strength of Sampath is that he is an excellent spotter of raw talent and quite a few players whom he has groomed have gone onto represent Sri Lanka.

Very rarely does Sampath get his calculations wrong and he is a prophet of sort in local cricket. Sampath will shape Sri Lanka’s under-19 cricketers as their Batting Coach. A permanent coaching staff for the Under-19 team is further proof that SLC is keen to improve their record in ICC Youth World Cups. Despite possessing a strong school cricket stricture, the nation’s performance in the biannual ICC event is appalling.

While Sampath was dominating school cricket in the hills, deep down south one of his contemporaries was forming the nucleus of one of the greatest schools’ teams the country has seen. Dhammika Sudarshana produced some stunning results with Richmond College.

Richmond’s style was different. They did not produce many players who scored 1000 runs in the season or took 100 wickets but they won a record number of matches. Richmond played an aggressive brand of cricket and they had an impressive collection of silverware and all along won the Lovers’ Quarrel as well, the showpiece sporting event of the south.

Sudarshana has been appointed as the Batting Coach of Sri Lanka Emerging team. But is that where he belongs? Is that his strength?

There’s little doubt that Sudarshana or Perera are capable of handling the Sri Lankan Under-19 team on their own. Their resumes would show that. But we always look for an ex-Sri Lanka player to be named the Head Coach for some strange reason. Had other countries followed similar formulas, we would have never seen the likes of John Buchanan or Graham Ford. Two of the finest coaches the game has ever seen, played less than a handful of First Class games.

We made the same mistake with Harsha de Silva. Harsha nurtured some impressive talents and there was a time when St. Joseph’s College were the dominant force in school cricket. Harsha stepped down from school cricket having got an offer from SLC but after being shortlisted for the Undre-19 job, never got it. Instead, he was handed the women’s team. But his strength was managing schoolboy cricketers.

For school coaches, it is quite tough to resist SLC offers as they are quite lucrative. But if they do not have job satisfaction, they better remain where they are and keep producing solid players. Often, coaches opt to move on and sign on the dotted line as they need to keep the house fire burning.

The appointment of Avishka Gunawardene is another step in the right direction. One of the best coaches we have, the former opening batsman has generously acknowledged various coaching tasks he had been given, be it as the Batting Coach of the national team or Head Coach of the Under-19 side. It is time that he settles somewhere and ‘A’ team is an ideal place for him as he will be able to

prepare the players who are about to get a taste of international cricket and then look after those who get axed from the national team.

After some 12 years with Sri Lanka Under-19, former leg-spinner Upul Chandana has got a promotion as the Fielding Coach of the ‘A’ team. At a time when the national cricket team’s fielding standards hit new lows, the Under-19 side was always impressive and that was all thanks to Upul.

He should have been drafted to the national side many moons ago but we were happy to deal with foreigners despite not achieving desired results. Chandana is someone who works extremely hard with the players and comes up with novel methods to improve standards. He still struggles to get a break at the highest level.

Ruwan Kalpage who has been put in charge of the Emerging team brings along with him lots of experience. A seasoned campaigner, he was with the national team set up for some 15 years in different roles. He then worked with Bangladesh and has returned home. Kalpage is a Jack of all trades. He can fit into many roles like Computer Analyst to Fielding Coach or Spin Bowling Coach.

The future of Sri Lankan cricket seems in safe hands.