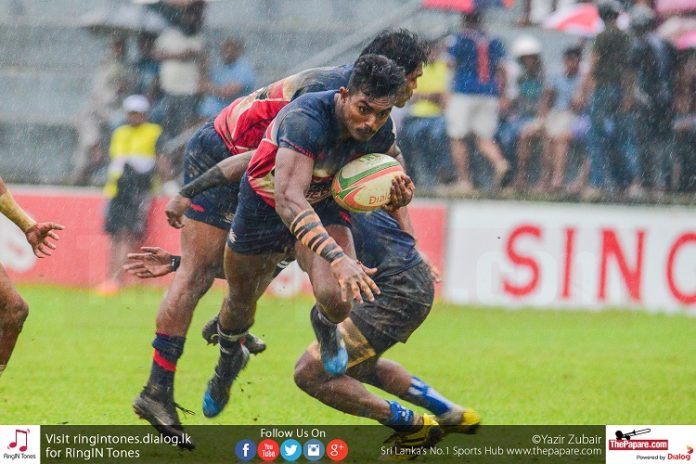 Kandy Sports Club once again showcased another dominant performance, beating the Airmen from Rathmalana 55 points to 13, in their Dialog Rugby League 2017/18 encounter at Nittawela this evening. Kandy scored their points through 9 tries of which 5 were converted. Air Force got a penalty try and put through 2 penalties to gather 13 points in the game. Kandy surprisingly played Nigel Ratwatte, dropping the tournament’s highest point scorer Thilina Wijesinghe. Skies had opened up in the morning making it a muddy affair and more of a forwards tussle.


Air Forced kicked off amidst a slight drizzle that was passing through. Both teams  made handling errors early in the game. Eventually Dimitri Wijethunga went over the try line courtesy of a rolling maul set up through a line out; giving Kandy their first points of the game. Nigel missed an easy conversion from the left flank. (Kandy 05-00 Air Force)

Dimitri Wijethunga had an excellent game today making some strong runs at the opposition’s defence and his work rate was excellent being at the first receiver position.

Kandy extended their lead by another 7 points, this time it was Tharindu Chathuranga. Ranjan after having collected the ball safely spread it wide to the backline finally switching it to the forwards to go under the posts. Nigel added the extras from under the posts. (Kandy 12-00 Air Force)

Richard Dharmapala then dived over at the corner flag to clear Kandy 17 points away from Air Force. It was excellent hands from Gayan Weerarathne who offloaded it to Fazil who sucked in the defender and handed it to Richard to dive over the whitewash. Nigel yet again failed to add the extras. (Kandy 17-00 Air Force)

The first half saw 3 yellow cards being handed to both teams, two to Airmen Pabasara Hewage and Isuru Jayarathne and one to Buwenaka Udangamuwa.

Gayantha Iddamalgoda then pinched two penalties either side of Fazil Marija’s try which gave Kandy a bonus point. (Kandy 17-03 Air Force) Marija exploited a gap after receiving the ball from Sooriyabandara from the back of the scrum and had no hesitation to go himself. Nigel this time added the extras from under the posts. (Kandy 24-06 Air Force)

Referee blew the whistle for half time soon after Marija’s try. The half was played more in the Air Force half and Kandy dominated the possession even though Air Force made some threatening breaks at one instant the Air Force full back made a run from his own 22 to the opposition’s 22 only to knock it on while trying to offload.

Second half kicked off in heavy rain but Kandy managed to more than double their first half score in the second, this was arguably their best second half performance of the season.

Wilwara became the highest try scorer as he got over the try line. This was more of a regulation try, simple hands brought the ball through the backline and Wilwara finished with ease. Nigel who had left his kicking boots at home missed again. (Kandy 29-06 Air Force)

Thilina Wijesinghe then replaced Nigel Ratwatte and through his first touch he managed to score his 4th try of the season and extended his lead as the highest points scorer of the tournament. He added the extras through a left corner flag conversion. (Kandy 36-06 Air Force)

Pabasara Hewage received a second yellow card which meant it would be red and Air Force was down to 14 men with around 20 minutes on the clock.

Srinath Sooriyabandara then got on the scoresheet after having received the ball from behind the scrum he ran into a gap and chipped it over the oncoming defenders and grounded inside the try area after having chased his own kick. Wijesinghe added another 2 points to his tally. (Kandy 43-06 Air Force)

Yet again it was simple hands by Kandy taking a quick tap from a penalty received and spreading it to the wings knowing they have the numerical advantage on their side. This time it was Danush Dayan who went over the line. (Kandy 50-06 Air Force)

Air Force finally got their consolation try through a penalty try. They picked and knocked at the Kandy defence who held strong for a good 5 minutes before they managed to get 2 advantages and referee finally decided to award the penalty try for being off side.

Kandy sealed the nail in the coffin through Gayan Weerarathne. Sooriyabandara chipped the ball over the defence and the full back of Air Force failed to ground the ball and sweeped in Weerarathne who grounded the ball for his try. Jamaldeen failed to convert from the left corner flag.

Kandy will next have CR down at Longdon Place and they will look to make the most out of the trip to Colombo to remain unbeaten.