Home Rugby Club Rugby CR&FC down Soldiers by a point 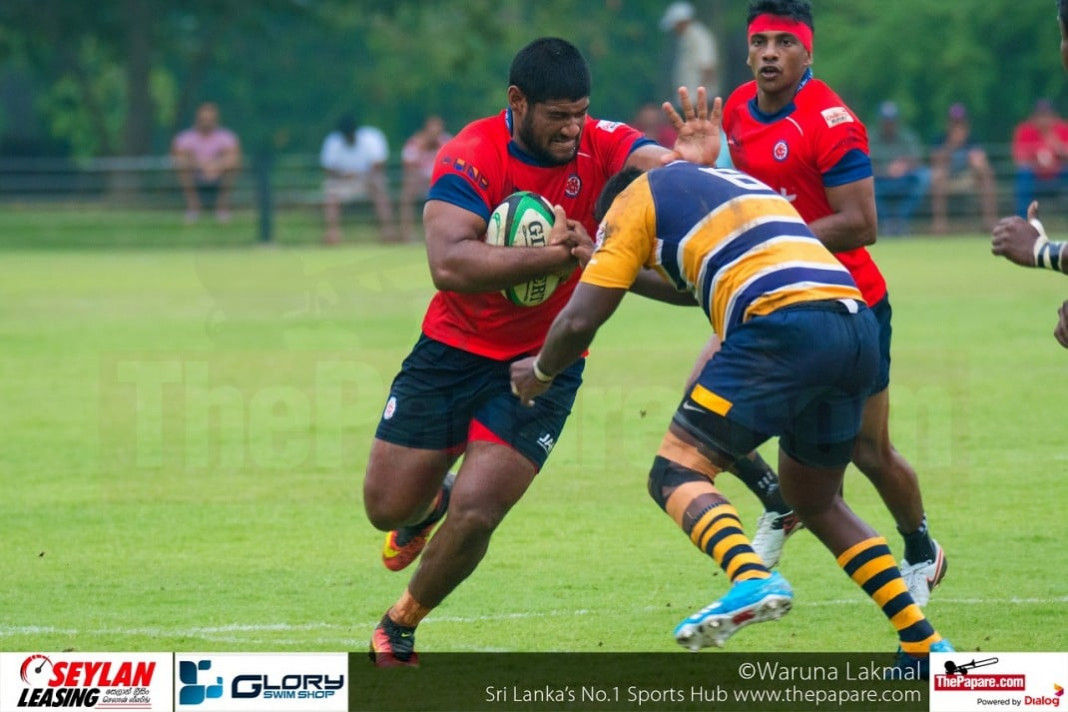 Last match of the opening week saw Army sports club hosting CR at Race course international stadium today (06th November). With rains coming in on and off, the race course pitch remained soggy under foot but was by far the best pitch this weekend games were played on. In arguably the most balanced game of the first week, the Red shirts were pushed to the very end by a gallant Army outfit.

From the start of the game both teams made their intentions of playing a territorial game clear as they favored kicking for territory rather than retaining possession . CR& FC looked most effective with their kicking having three very able kickers in Kavindu Costa, Tarinda Rattwatte and Rizah Mubarak. Mubarak has returned to the club he started his career after stints at Navy SC and Police SC.

Army on the other hand looked solid in their set pieces with forwards wining some impressive lineouts and the backs attempting well-rehearsed ploys but lacked execution when it came to the finishing touches.

Army was on the attack having built up some good phases, but 15 minutes into the first half, it was CR&FC who scored the first points of the game against run of play.  Sashan Mohammad and Tarinda Ratwatte linked beautifully passing the ball back and forth and Ratwatte touched down for the Red’s for their first try.  CR&FC backs looked dangerous in the counter attack whenever they had the ball in hand. CR&FC 07 – 00 Army

Having won the ball back soon after the restart, Army inside center Kasun Maduranga made a line break but could not find support to off load. Army earned a penalty for their continued pressure around the fringes and full back Shanaka Kumara obliged adding the first points for Army just before half time.

With the turn of sides CR& FC was caught napping when a miscommunication between Kavindu de Costa and Randithj Warnapura under a high ball opened up a gap for Army Fly Half Ashan Bandara who managed to creep through the space and put Iranga Ariyapala in space, Ariyapala an impressive Center three quarter in the current league had no problem touching down under the post. Shanaka Kumara added the extra points to put army in the lead for the first time. (CR&FC 07 – 10 Army)

Army made inroads in the second half and the quick score to clinch the lead did a world of good to the CR players as they looked like they were in a slumber in the second half. Some good work by skipper Shane Sammandaperuma and his fellow front row Supun Warnakulasuriya was put to good use when almost the entire CR team touched and passed the ball the entire width of the pitch to put Rehan Silva in for a try on the left extreme of the field. Mubarak failed to add the extra points from what was a difficult angle but compensated shortly afterwards adding three more points through a penalty.(CR&FC 15 – 10 Army)

CR somewhat struggled with their lineout whereas Army looked on point with theirs. The Red’s hooker Waranakulasuriya miscued a throw which Sammandaperuma collected and made a strong carry close to 20meters steamrolling Army’s Sudarake Dikkubura on the way and passing it to Dilanka Perera who also carried the ball well and set up a ruck. With Kavndu de Costa supplying quick ball from the base, Tharinda Ratwatte decided to go into contact by himself. His opposite number Ashan Bandara held Rattwatte and managed to rip the ball off his hands to run through the unsuspecting CR defense and touch- down under the post for the Soldiers 2nd try. Shanaka Kumara added the extras regaining the lead for Army.(CR&FC 15 – 17 Army)

The back three for Army, Iranga Ariyapala, Sudarake Dikkubura & Shanaka Kumara worked in unison to create a big hole in the CR defense but Danushka Thalwaththa could not hold onto the ball where he could have strolled to the try line. Thalwaththa’s day went from bad to worse when he lost the ball forward yet again inches away from the try line after some good hands by the soldiers denying them of a try for the second time in 5 minutes.

Rizah Mubarak was impressive for on his return for the Longdon place club. His clearance kicks as the last man of defence took a big load off the forwards and he once again came into CR’s rescue slotting in a penalty from 30m out to put CR in front. (CR&FC 18 – 17Army)

Army Winger Iranga Ariyapala was outstanding for the soldiers as he looked dangerous every time he had the ball in his hand. Chasing a box kick by the half back Mohomad Rizvi, Ariyapala managed to go through two CR defenders before he was brought down. Army however could not finish the promising chances created by Ariyapala and paid the price for indiscipline as they conceded a couple of penalties in quick succession. Having moved into the last 10 minutes of the game, CR& FC set up a maul through an ensuing penalty and Dilanka Perera scored for the Longdon place club. Mubarak was again on target adding the extras. (CR&FC 25-17 Army)

There was more drama in store in this enthralling game as Army SC was determined to open their season with a victory. Army half-back Rizvi decided to change the direction of play and go to the short side of the field where he found skipper Manoj De Silva running an immaculate line. De Silva collected the ball in space and with a show and go and acceleration that reminded of the infamous All black hooker Dan Coles, De Silva was under the post to make the Red’s fans somewhat nervy.  Shanaka Perera obliged again adding the extra points. (CR & FC 25-24 Army)

With the clock bordering the 80 minute mark, Army was determined to touch down again as referee had enough time for another restart. But a handling error by a charging Army player during the wave of intense attack towards the goal line was the final infringement as the lads in Red breathe a sigh of relief.