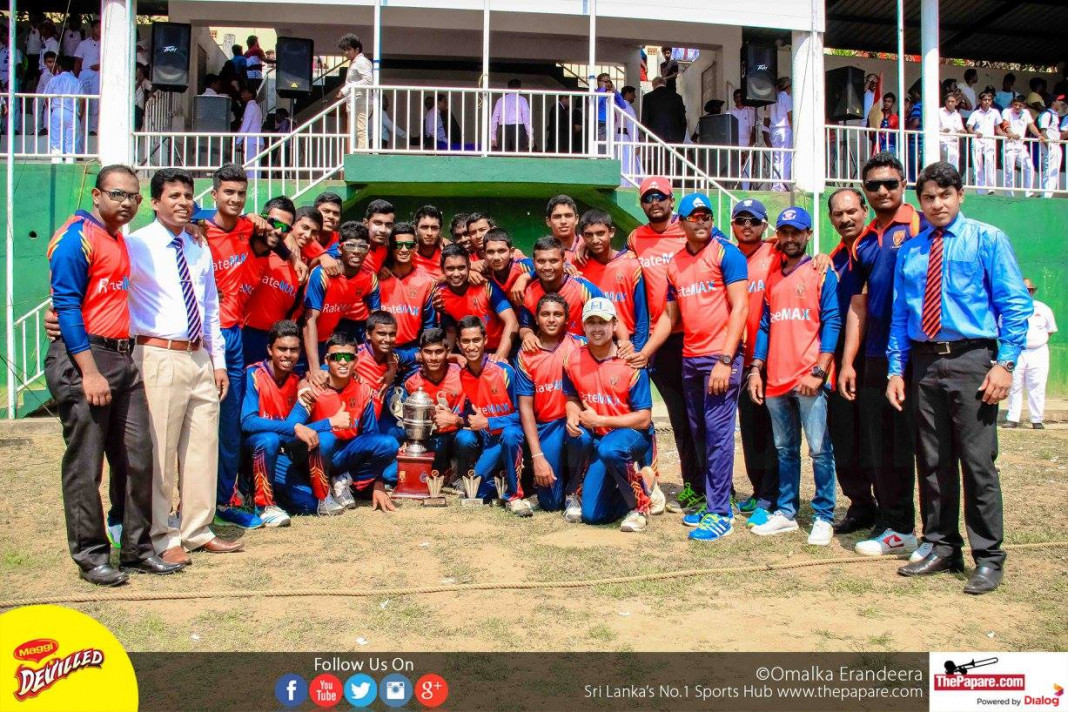 Bowling out the Antonians for a cheap 89 runs in a matter of 31 overs, Trinity College raced to the winning score in a matter of 10 overs to retain the Sir Richard Aluwihare trophy in the 36th limited overs encounter.

When St. Anthony’s skipper Kanishka Ukgalpaya won the toss and elected to bat first on a green wicket at the Katugastota Oval, it wouldn’t have been in his gravest nightmare that he though that his team will end up with just 89 runs.

Coming out to bat, opening bowler for Trinity Lahiru Kumara gave him an essence of his swinging capabilities picking the first wicket when the score stood at zero. Opening batsman Lahiru Wijebandara had to walk to the pavilion having faced five balls.

Skipper Ukgalpaya had to make his walk in the next over when he was dismissed for 4 off Thisaru Dilshan. With the score standing at 4/2, the Antonians looked to calm things down and build on their partnership. Right when things were going good between middle order batsmen Janidu Himsara and Theeksha Gunasinghe, Himsara had to walk back after scoring just 12 as he was bowled out by Duvindu Tillakarathne.

Theeksha Gunasinghe and deputy skipper Mohamed Alfer steered the innings past the 50 run mark but later fell for 16. While the wickets were falling, it was important for the Antonians that they minimize their risks and keep the strike with themselves but they opted to attack the bowlers.

Kavindu Yapabandara who came in after Gunasinghe huddled two massive sixes out of the ground in his 20 runs he made but after his dismissal as the sixth wicket at 82, the rest of the team followed his lead like a set ducklings running behind their mother as St. Anthony’s were all out for 89 runs.

It was a dominating performance by the Trinity bowling department with all their bowlers contributing. Lahiru Kumara picked up two wickets with the crucial wicket of Kanishka Ukgalpaya and Shanogeeth Shanmuganathan had the luck of dismissing two. Doing the final rites, Raveen Sayer got the final two batsmen in the last two deliveries of the 31st over leaving him on a hat-trick delivery.

Coming out to chase, Trinity got into a flying start with Shanogeeth Shanmuganathan and Nushan Weerasinghe on strike. Nushan Weerasinghe stroked a 21 ball 29 runs that included six fours before being a victim of Satheesh Wickramarachchi. The next duo Shanogeeth and Dilan Jayalath took on the challenge and was left with 14 to get in the final over.

Dilan stroked two consecutive boundaries leaving his team total at 84 and had six more to get. The fourth ball of the 10th over saw Dilan stepping forward and striking the ball over the fielder at Long-on as Trinity successfully chased 90 runs in a matter of 58 balls.

Trinity chased the target down by 1.00 p.m. and this has been the first time for the last two decades that a limited over encounter has ended with less than 50 overs bowled. It was a disappointment for the Antonians who were playing in their home turf and will their 9 wicket loss to Trinity will run through their minds every time they step in to the grounds.

With this win, Trinity takes the lead in the overall trophy tally as this was their 18th win in the 36th year. St. Anthony’s have 17 wins and the 2014 game was drawn.

The player of the match award went out to Shanogeeth Shanmuganathan for his unbeaten knock of 31 runs and his two wickets.