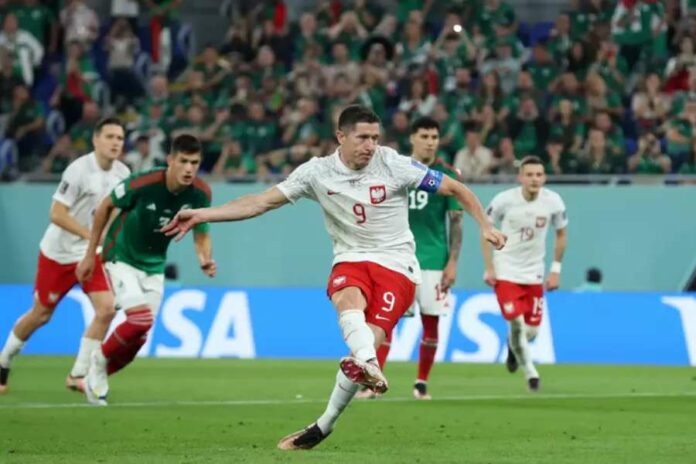 Robert Lewandowski was denied a first World Cup™ goal when Guillermo Ochoa saved the striker’s second-half penalty to earn Mexico a deserved share of the spoils against Poland on Tuesday.

Barcelona player Lewandowski’s effort from 12 yards was one of only two attempts on target from the Poles. The Central Americans were the more progressive team, but similarly short on clear opportunities. Wojcieh Szczesny in Poland’s goal readjusted his footing to repel a deflected Edson Alvarez shot and Alexis Vega skied a late strike from distance.

Poland had their golden chance when Lewandowski was impeded in the box by Hector Moreno, as the pair grappled in pursuit of a forward ball. Referee Chris Beath awarded the penalty after a VAR check but following a wait nearing four minutes Lewandowski saw his attempt to Ochoa’s left parried away by the veteran goalkeeper.

Poland’s record scorer Lewandowski has 76 international goals but his wait for a World Cup strike extends to a fifth game and his team’s meeting with Saudi Arabia on Sunday.

Unquestionably the penalty stop from Ochoa that prevented Poland burgling all three points against a game Mexico team.

Lewandowski showed no outward sign of butterflies as he respotted the ball during an extended wait to take his kick. The attempt was accurately placed but Lewandowski will probably concede he could have done with applying more power . Ochoa, at his fifth World Cup and ever-present in Mexico’s campaigns in Brazil and Russia, was equal to the strike.

The 37-year-old sprang to his left to save and add another clean sheet to a CV that features World Cup shutouts against Brazil and Germany. More importantly, Ochoa banked his team a vital point in advance of Group C fixtures against Argentina and Tuesday’s headline makers, Saudi Arabia.

Stat of the match

Guillermo Ochoa’s penalty save from Robert Lewandowski is the first one to be saved by a Mexican goalkeeper (excluding shootouts) since Oscar Bonfiglio denied Argentina’s Fernando Paternoster in 1930.