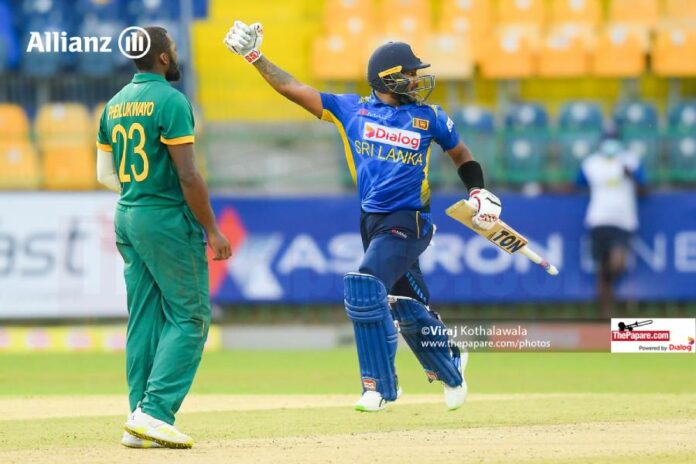 Having taken a cue out of the champion cricketing outfits of West Indies, Sri Lankan batters threw caution to the wind waiting to cash in the moment they saw an opportunity.

The theory seemed to be that if the first ball you face is there to be hit, hit it. Simple! The Sri Lankans had thrown the MCC coaching manual out of the windows and were playing a new brand of exciting cricket.

Does anyone remember the SSC Test of 1985 against India? Sri Lanka had not won a Test match yet and India set a teasing target of 128 in 11 overs. Guess who walked out to open the innings instead of Amal Silva and Sidath Wettimuny.  Skipper Duleep Mendis took up the challenge and along came Aravinda de Silva. And they did make merry, taking 17 runs off the first over of the run chase. India’s captain Kapil Dev bore the brunt of Sri Lanka’s audacious stroke play.  Bad light unfortunately forced an early end to the game.

Times have changed drastically and unfortunately we don’t have that many risk taking, audacious, carefree, swashbuckling batsmen anymore. Even the few we have been given the cold shoulder for some strange reasons.

When Avishka Fernando made a hundred in the opening ODI against South Africa, Director of Cricket Tom Moody said that Avishka Fernando was an all format player.  Yet, three innings later, he was axed from the side. Inexplicable.

When Avishka was kicked out of the bio-secure bubble in Galle earlier this year for failing to meet the minimum fitness standards, he did not grumble on social media. He was made to miss back to back series until he got back into shape. Avishka, to his credit, worked on his fitness and bounced back; fitter, stronger, hungrier and leaner. Since making a comeback, he has shown a lot of energy on the field and commitment in running between the wickets. A career of a player can be built when these characteristics are on display.

Players with this kind of attitude need to be protected, nurtured and persevered with specially as he is one of our few players with the rare gift of being able to clear the boundary against pace or spin. Into the bargain, he is young, just 23. So here’s your player for the future. You give him confidence and opportunities before an event like the World Cup. Don’t just axe him on flimsy grounds. After all, he has been in form too having produced a match winning hundred. What’s the fuss!

There’s no way that people can justify Avishka’s axing given T-20 cricket is the ideal format for his temperament. True, there is this counter argument that his numbers in T-20 cricket aren’t great. But come on, Rome was not built in one day.

As Anand Vasu, one of the game’s sharpest brains wrote, ‘The shots Avishka plays and the time he has, he is Aravinda’s heir apparent.’

The system has destroyed so many players gifted with rare talent. Chamara Silva is the classic example. He made a half-century in his ODI debut against World Champions Australia. Then, on the eve of his Test debut at Asgiriya in 2002, there was a revolt and the selectors were axed. He had to wait for four long years to get a break in Test cricket.

The debut didn’t go to plan as he collected a pair in Christchurch at the old Lancaster Park. But Tom Moody doesn’t give up on young players. He gave Chamara a second game in Wellington and he produced a match winning classy 150. Had Moody continued without stepping down a few months later,  players like Chamara would have got the long rope and he could have gone onto have a successful career.

It is not just Avishka who needs the long rope, even captain Dasun Shanaka. There are lots of murmurs at the moment after Dasun has failed to fire with the bat. Well, the fact that the series was played on rank turners did not help his cause. But Dasun needs backing and support.

Although he may not warrant a place in the ODI side given his form, once you have identified him as a leader, you need to back him until he comes good. There are no other options available and that’s the truth.

During his brief tenure, Dasun may have not done much on the field to impress fans. But certainly off the field, he has made quite an impact and certainly SLC seems to be happy with him. They think that he is the man for the job in the long run.

Dasun apparently bemoaned the attitude of young players at training and has been advocating that more emphasis be placed when it comes to practices. He doesn’t seem to be a big fan of optional training. He has also pointed out certain deficiencies in the system which has impressed the authorities and at the moment he has been given all the support.

It is time fans back him too. He maybe not your best player but he is certainly a good leader.  Good leaders are certainly the need of the hour.