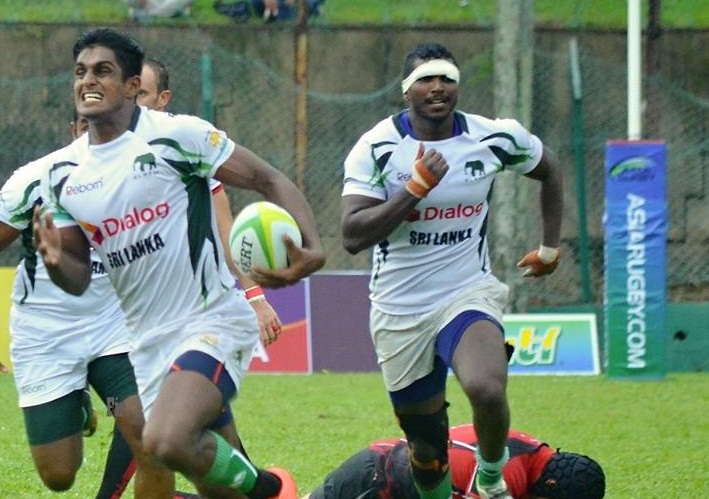 The Tuskers full back Riza Mubarak kicked off this all-important game for the South Asian rugby giants after being thrashed by Malaysia couple of days ago. In the third minute, the Sri Lankan defensive line was penalized for being off-side and the Philippine fly-half, the left-footed Oliver Saunders neatly bisected the posts from 40-meters out. (SL 00 – PHI 03)

Five minutes later, the Philippines made the same mistake in their own 22’ which gave a simple 22-meter penalty kick to Riza Mubarak who levelled the scores. (SL 03 – PHI 03)

Sri Lanka defended several phases in their own 22’ until Achala Perera ripped out the ball and gave Jeson Dissanayake the opportunity to counter-attack who then gave a nice pop-pass to center Kanchana Ramanayake to steam ahead 80 meters and score under the posts with just 12 minutes on the game clock. Mubarak added the extra points. (SL 10 – PHI 03)

With just 17 minutes on the clock, the Tuskers were stopped just meters away from the big whitewash by some stiff Philippine defence but they gave away a penalty for not releasing the ball-carrier. Riza Mubarak continued his good work with the place-kicking by extending the lead by another three points. (SL 13 – PHI 03)

Straight away from the restart, the Philippines entered the Lankan 22’ and made them pay for indiscipline on the breakdowns as the Tuskers were infringed for not rolling away. Oliver Saunders easily booted over the 10-meter penalty. (SL 13 – PHI 06)

Danushka Ranjan almost scored his first try by charging down Saunders’ touch kick but could not hold on to the ball with the try line beckoning. The Philippines scored their first try of the match in the 30th minute when a set-play move by their backline gave enough space to Harrison Black score in the far corner. Oliver Saunders failed to convert. (SL 13 – PHI 11)

Just before half-time, Sri Lanka struck from their own in-goal area as they initiated a superb set-move which opened up gaps for Ramanayake to run freely before off-loading to Jeson Dissanayake who sprinted away for 50 meters and dived under the posts to score a stunning try. Mubarak had no problems with the conversion as the first-half came to a close.

After lemons, Oliver Saunders restarted the game. The Philippines had most of the possession in the first ten minutes of the second half but the lion-hearted Tuskers defended extremely well to push them back to their half and regain possession and territory.

The momentum shifted towards the Tuskers in the next ten minutes as the backs were once again looking to run wild.  However, they could not capitalize on the try-scoring opportunities and convert them into points due to a few unforced errors. Sri Lanka got a penalty in the 58th minute when the Philippines were found off-side but Mubarak’s kick ricocheted off the posts.

As the game entered the final quarter, Philippines struck back through their No.8 Terrance Carroll who barged over the try line to reduce the deficit. Oliver Saunders added the extra points. (SL 20 – PHI 18)

Sri Lanka were a different side in the second half as they lost intensity and lacked composure meanwhile, the  Philippineswere up to the task, building excellent phases together.

Unfortunately for Sri Lanka, winger Danush Dayan was carried off the field due to a head injury as the Philippines got back into the lead in the 74th minute when the Tuskers were penalized for off-side play and Oliver Saunders easily bisected the posts. (SL 20 – PHI 21)

The Lankans needed some magic in the dying moments of the game as rain pelted down heavily. Their best move of the entire second half came in the last-minute when a brilliant shift across the field paved the way for Jeson Dissanayake to dive over near the left touch-flag as Sri Lanka broke the Philippine hearts. Mubarak failed to fire across the conversion as referee Paul Mckay blew the final whistle.