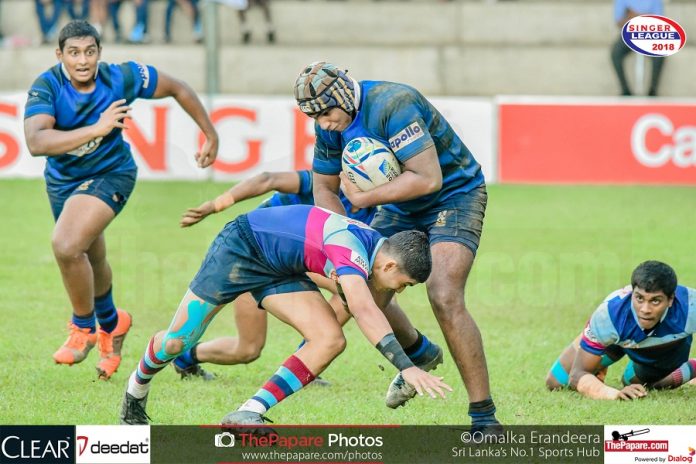 S. Thomas’ College Mount Lavinia clinched an astonishing victory in the hill capital Nittawela stadium against their group 1A rivals St. Anthony’s College earlier this evening. Heading into the game both teams were already looking down the barrel after being relegated to the plate segment of the competition. However, S. Thomas’ managed to finally get points on the board with a 31-29 win, after leading 26-15 at the breather.

The Antonians made a fine start, taking the game to the lads from the school by the sea, playing at speed and also using the width of the field to great use. It took them just two minutes to get on the scoreboard through Niranga Ranaweera, courtesy of some great interplay between Theeksha Gunasinghe and Ishara Liyanage, the fly-center combination and eventually it was Liyanage who sent his winger Niranga free with a defence-splitting pass to coast over from close range. Makarim failed to add the extras from the corner flag. (STC 00-05 SACK)

The second try came just three minutes later for the Antonians in a similar fashion as the first. An extremely dominant run by speedster Ishara Liyange stepping in and out through the Thomian  defence, revealed a path for Theeksha Gunasinghe to touch down exploiting an overlap in the left corner. Makarim’s kick fell short of its intended target. (STC 00-10 SACK)

The Thomians however weren’t going to lie down surrendering to the early onslaught by the Antonians. They soon switched gears and started playing some excellent rugby, arguably the best they’ve played so far this season. With advantage on their side they took play inside their opposition’s red zone, building up a few phases drilling through the defence to score a try in the 14th minute. It was their captain Christian De Lile who picked and dropped over the whitewash in the left-hand corner. Aaron Ferdinando converted from the right flank. (STC 07-10 SACK)

It didn’t take long before Thomas’ were camped in the red zone yet again as they continued to string some phases together. With some lovely interplay exchanges in the midfield by Handupathirana and De Lile, the ball found the hands of Aaron Ferdinando who dove over the try line cutting back inside from the wing. He added the conversion of his own try to go into the lead for the time. (STC 14-10 SACK)

After some scrappy play by both teams off the restart, the game settled down to be an absolute thriller with the Antonian crowd getting involved with the cheering. However, they were soon silenced by Ferdinando as he scored his second try of the day. The Antonians knocked on right in front of the posts while defending their line, mainly due to heaps of pressure by the Thomian forwards. The resulting scrum rewarded Ferdinando with a quick cut-out pass from the scrum half who dashed to the line undefended to score an unconverted try. (STC 19-10 SACK)

Despite that setback, on the half-hour mark, Anthony’s launched an attack from the half way mark finding its way into the danger zone, toiling through several phases inside the 22 as Udara Ariyapala fended off three defenders before crossing over for his side’s third try. (STC 19-15 SACK)

On the stroke of half-time, a wonderful team try from a wraparound move involving a smooth combination of passes between forwards and backs saw Adeesha Handunpathirana barging his way over the try line. This meant the visitors took a 24-15 lead into the interval.

Soon after the half time break Christian De Lile and Adeesha Handunpathirana earned themselves yellow cards for repeated infringements on consecutive rucks giving the Antonians a two-man advantage. The resulting penalty meant that the nippy scrum half Sohail Waseem crawled over the line for the 4th try. Janidu Himsara who took over the kicking duties put through the conversion. (STC 24-22 SACK)

A poor collection off the restart resulted in another try for the Antonians who were taking the maximum use of the two yellow cards. Theeksha Gunasinghe was the man who scored courtesy of an offload by Mohommed Shabeer meters away from the try line. Himsara yet again was successful with the conversion to go into the final minutes of the game with a lead of 5 points. (STC 24-29 SACK)

Christian De Lile stole victory with the final try of the game to earn themselves the first win of the season. The forwards brought play inches away from the try line with eventually de Lile barging his way through. Fedinando added the extras to give Thomas’ the win. (STC 31-29 SACK)

The battle for Schools Rugby promotion is ON! Fixtures Released

7 things we know after the 1st leg of the Bradby