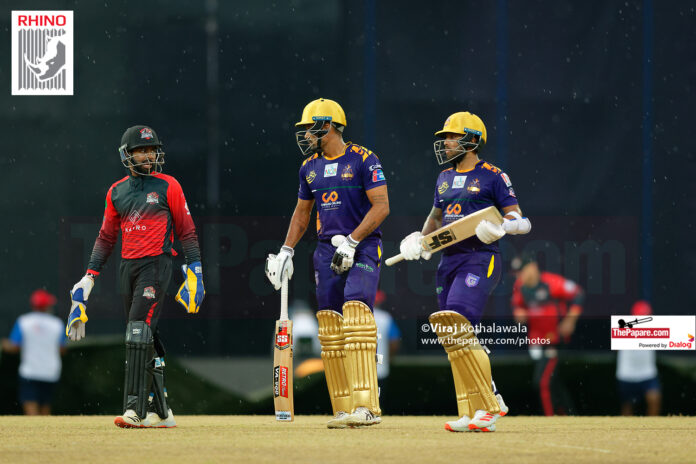 Ramesh Mendis produced another late-order cameo to push the Dambulla Giants to 159 against the Galle Gladiators in Match 8 of the Lanka Premier League before incessant rain saw the game called off.

Coming in with the score on 79/2 in 11.2 overs, Mendis put on 45 off 38 alongside captain Dasun Shanaka to steady the Giants innings, before striking a couple of big blows to take them across the 150-run mark.

It was a very familiar score line for the Giants, whose middle order has continued to struggle in the tournament when the openers Phil Salt and Niroshan Dickwella have failed to provide them with a considerable opening stand.

Salt, the top run-getter in the tournament so far, got a slice of luck once again when Samit Patel put him down at mid-wicket off Nuwan Thushara in the 1st over of the game. He looked like he would make the Gladiators pay when he struck 4 consecutive boundaries off Lahiru Madushanka in the next over, but Thushara got him soon after and from there the Giants were not able to get any momentum into the innings until the end stages of the innings.

A rain-break at the end of the 17th over of the innings was the turning point of the innings, after which the Giants added 42 runs off the last 3 overs.

Galle Gladiators started well, with Kusal Mendis taking 15 off Nuwan Pradeep’s 1st over, but only 8 balls were possible in the chase as the rain returned and continued for the next hour or so.

Both teams will take a point apiece from the match.