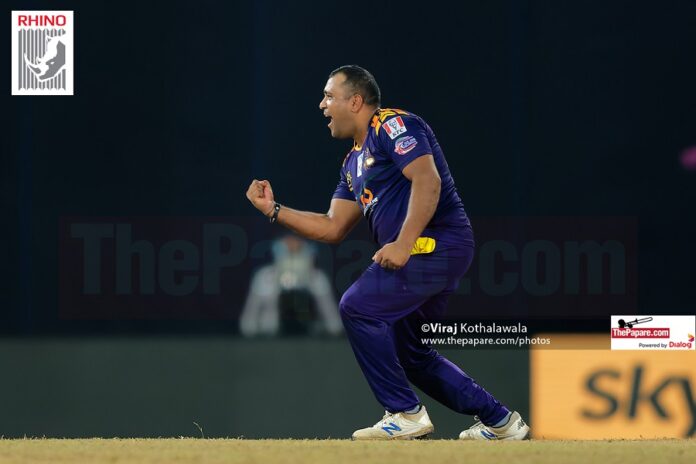 Galle Gladiators managed to defend 135 in 14-overs-a-side affair against the Dambulla Giants in game 16 of the Lanka Premier League.

The Gladiators started steadily with the bat, Kusal Mends particularly impressive once again at the top of the order. With only 14 overs to bat, the Gladiators raced to 41/1 in the 4 over powerplay.

The Giants struck regularly, but the Gladiators managed to keep the run-rate above 10 through the 1st 10 overs.

Josh Little’s 11th over turned the game in favour of the Giants as the Irishman managed to pick up both set batters Bhanuka Rajapakse and Mohammed Hafeez. Little had a great day for the Giants, picking up 2 wickets (he could have had 3), a good running catch and a runout as well.

The defense started perfectly for the Gladiators with Mohammed Amir bowling a wicket maiden to kick things off. The Pakistani veteran bowled Niroshan Dickwella off the 3rd delivery of the innings and almost had Janith Liyanage lbw with the very next ball, but the ball was missing the stumps.

Liyanage turned out to be a real find for the Giants, the 26-year-old, making his LPL debut struck 51 off 37 deliveries, nearly delivering a match-winning performance alongside Phil salt as the pair put on 90 for the 2nd wicket in just over 10 overs.

Just as the momentum had shifted in the 11th over of the Gladiators’ innings, it happened in the Giants innings as well. Isuru Udana made the key breakthrough, albeit through a full toss which Salt should have sent to the stands.

Samit Patel tightened things further in the next over, picking up Dasun Shanaka and Liyanage off consecutive deliveries.

Najibullah Zadran struck some late blows but conceded too many dot balls as the equation eventually proved out of the Giants’ reach.

However, with the Kandy Warriors losing the game against the Colombo Stars earlier today, the Giants booked their place in the playoffs as well. The Gladiators moved to 7 points in 7 games with this win, becoming the 3rd side to secure a spot in the playoffs, leaving Colombo and Kandy to battle it out for the last position.