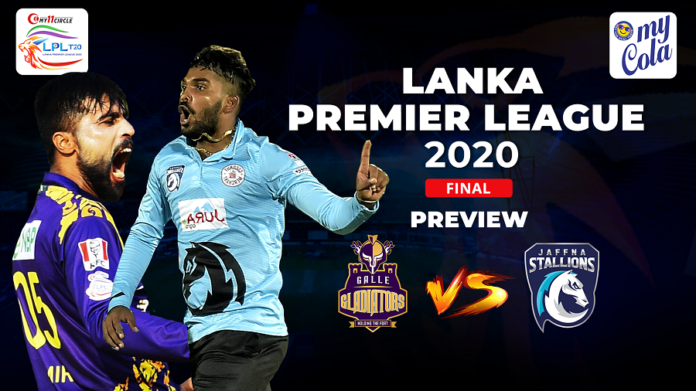 The Thisara Perera led Jaffna Stallions will meet Bhanuka Rajapaksa’s Galle Gladiators on 16th December at the Mahinda Rajapaksa International Cricket Stadium in the grand finale of the inaugural edition of the Lanka Premier League.

Interestingly, both teams have taken contrasting paths to the final. Stallions began their journey unbeaten in their first four matches but faded away in the latter half of the league stage as they tweaked with their playing XI to test their bench strength. The Gladiators on the other hand, lost their 1st five matches, before injecting some life into their journey to win 3 out of their 4 last matches, including the semi-final.

The final is set to be a test of the strength of each batting line-up as the bowling attacks of both teams have been outstanding so far.

Stallions boast the presence of the highest wicket taker of the tournament, Wanindu Hasaranga who has been nothing but a sensation throughout the LPL. The 23-year-old is also the only bowler of the tournament to maintain an economy of under six runs per over the tournament, added to which he has picked up 16 wickets. The Stallions pace battery is equipped with Usman Shinwari, Duanne Olivier and Suranga Lakmal who have been successful in providing early breakthroughs which allow Hasaranga and the other slow bowlers to choke the opposition in the middle overs.

The Galle camp have the services of Mohammad Amir; the best seamer of the tournament by far. He has been a catalyst for the Gladiators changing the course of their tournament with some brilliant performances. Amir has been bowling in the powerplay and death overs accompanied by Nuwan Thushara and Dhananjaya Lakshan, who have complemented him well. The top spinner for the Gladiators, Lakshan Sandakan, has flown under the radar but produced much-needed wickets in the middle overs for his team.

On the batting front, it has been a one-man show so far as Danushka Gunathilaka has been in the form of his life. While all of his teammates have found it difficult, Gunathilaka has turned up from game 1 to dominate the batting charts. The Gladiators’ batting did look improved at the later stage of the tournament as Ahsan Ali, Azam Khan and Bhanuka Rajapaksa have begun to show signs of getting back to their best.

The Jaffna Stallions did the double over the Galle Gladiators in the league phase, winning by eight wickets and 5 wickets, courtesy quick fifties from Avishka Fernando who has accumulated 176 runs against the Gladiators’ bowling attack. It could be curtains for Gladiators if they do not see the back of Fernando as soon as possible.

Win the toss and…

Gladiators have never won a game in the LPL after batting first as they opted to or were made to chase in the 3 matches they’ve won so far. On the other hand, the Jaffna Stallions have chased down the targets Gladiators have set for them fairly easily in the two meeting they’ve had too. With the dew coming into the equation at the later stages of the game, it is expected that both teams would opt to bowl first after winning the toss.