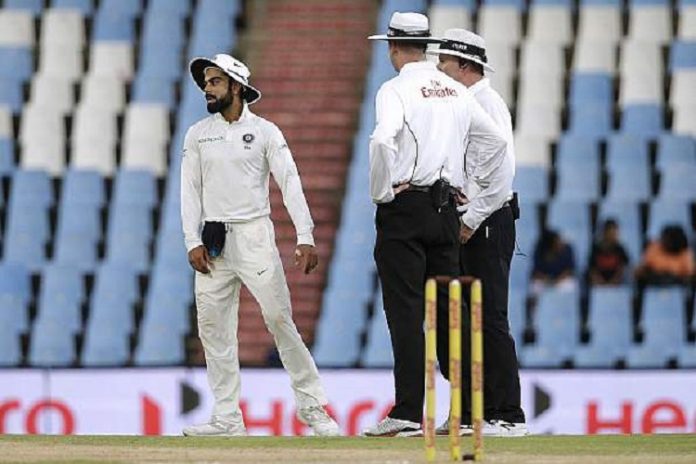 Virat Kohli, the India captain, accrued one demerit point and was fined 25 per cent of his match fee for his conduct which was found to be “contrary to the spirit of the game”.

His offence was a Level 1 breach of the ICC Code of Conduct for Players and Player Support Personnel, which carries a minimum penalty of an official reprimand, a maximum penalty of 50 per cent of a player’s match fee, and one or two demerit points.

On Day 3 of the second Test against South Africa in Centurion, during the 25th over of the home team’s second innings, Kohli continuously complained to the onfield umpire Michael Gough about the condition of the ball, insisting that it was being affected by the damp outfield. He also threw the ball into the ground “in an aggressive manner” which prompted the onfield umpires Gough and Paul Reiffel, along with third umpire Richard Kettleborough and fourth umpire Allahudien Palekar, to bring the charges.

Following the third day’s play, Kohli acknowledged his misdemeanour and accepted the sanctions proposed by match referee Chris Broad, which meant that there was no need for a formal hearing.

Following a rain interruption in the final session, play went on for 5.1 overs before the players left the field due to bad light. India were eager to continue and take advantage of the situation with the possibility of the ball swinging under lights, and an angry Kohli was spotted taking to the match referee Broad. Earlier, he had been chatting constantly with the umpires, indicating to them the issue of the wet ball.

“We were carrying a good momentum so we wanted to carry on. It is okay, we never get too disappointed because there is still lot of play left in the match. So we don’t get too disheartened that this (resumption of play) didn’t happen. We wanted to carry on but the things didn’t work out so it’s okay,” Bumrah added.

Meanwhile, Kohli became the second Indian player to receive one or more demerit points since the introduction of the system in September 2016. Ravindra Jadeja had accumulated six demerit points which had led to a one-match suspension.

Wins for Mahanama and Prince of Wales; St. Peter’s and Maris...

Brilliant opportunity for Sri Lanka to start 2018 on a winning...