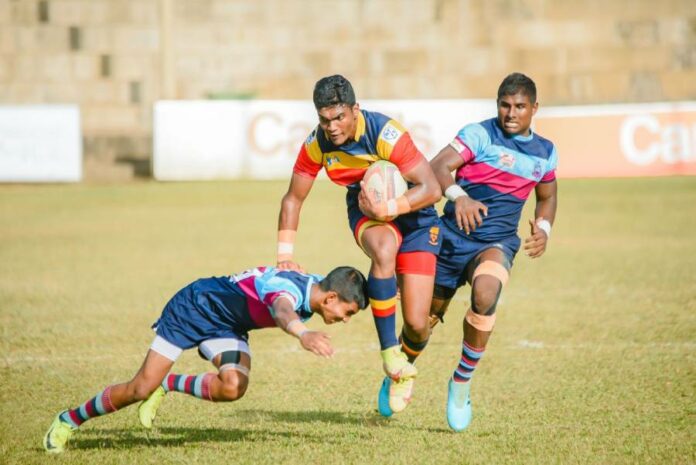 The Antonians started off on the right foot with the first points on board through a penalty. Sahan Keerthisiri bisected the uprights for St. Anthony’s as he controlled the game decently for them. However, Trinity College took their time but bounced back with a converted try through scrum-half Shaveen Premerathne to get in the lead.

Before Trinity could catch their breath after the try, the Anhonians pounced on some lackluster defending when winger Omitha Dissanayake found the whitewash. The conversion was not successful from Keerthisiri, but it took them back in the lead by one point. A few moments later, Keerthisiri made amends through a 3-pointer to extend the deficit.

Before the break, Trinity strung together a few phases and put the Anthonians under pressure. Despite hanging on in desperation, the hosts conceded a penalty and the Trinity full-back Kovida Wickramasinghe converted it to bring back the deficit to 1-point.

The second half started off with Trinity College dominating possession in the first few minutes. They rightfully got in the lead through a successful penalty by Wickramasinghe. From there on, Trinity dominated proceedings and St. Anthony’s were left to do all the defending.

The visitors were relentless and they finally persevered when Chamendra Danapala bumped through couple of tackles to find the whitewash. Initially, it was the forwards who did the hard work by pushing the Anhonians deep inside their own half.

With little over ten minutes on the clock, Trinity College were sitting comfortably in the lead. Out of nowhere, St Anthony’s found some life and got themselves back in the game with a converted try. From the line-out maul, the forwards carried the ball deep into the Trinity territory. After a couple of phases using the forwards, Sadula Athukorala barged over to score the second try for St Anthony’s. Keerthisiri added the extras.

Despite finding their way back to bring the game to deadlock at 18-all, St Anthony’s missed the plot in the last five minutes. Try scorer Athukorala was given the marching orders to the sin-bin which got St Anthony’s down to 14-men.

Trinity College found the opening they wanted as they called upon every ounce of stamina left in their system to push for the win. St Anthony’s College showed desperation in defense, but it was all in vain. After sending the ball back and forth down the wings, a gap opened up in the middle for Anuhas Kodithuwakku to creep through to the try line. Attab Manzil converted the try to seal the win for Trinity.

The live stream of the Dialog Schools Rugby League 2022 match between St. Anthony’s College and Trinity College was interrupted due to an unexpected power failure at the venue. We apologize for any inconvenience caused and thank you for your continued support and understanding.