Home Rugby Schools Rugby Kingswood and Wesley ready to set Royal Complex on fire for the... 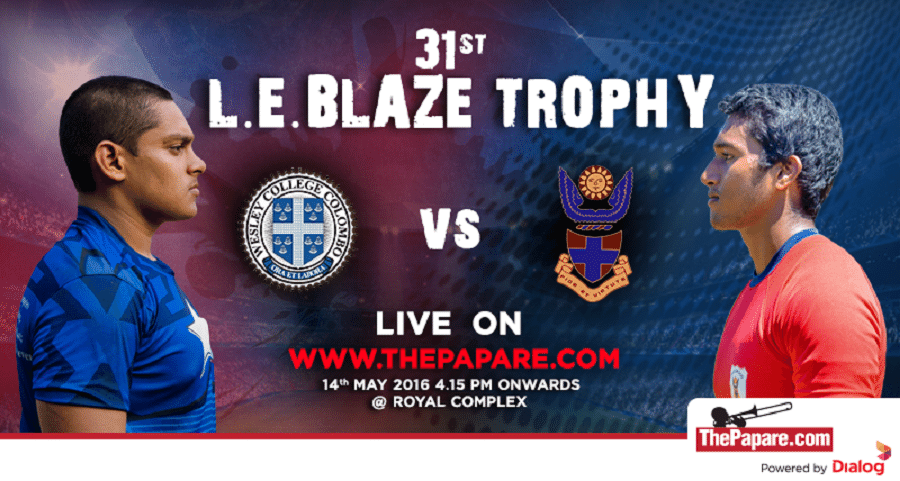 The encounter between two Wesleyan schools Kingswood College Kandy and Wesley College Colombo for the L.E Blaze memorial trophy is set to kick off at 4.30pm in the Royal College Sports Complex on the 14th of May 2016.

The “Blaze Trophy” is being played in honour of the great gentleman Louis Edmon Blaze, the founder of Kingswood College Kandy and the mighty personality who introduced Schools’ rugby to the island. Brother Schools Kingwood College Kandy and Wesley College Colombo set out to play this annual encounter as their Rugby “Big Match”. The first L.E. Blaze Trophy game was played on the 17th of July 1986; it concluded in favour of Kingswood. Kingswood was captained by Ronnie Ibrahim and Wesley by Sumedha Kuruppu.

It was a very active encounter till the early 2000s, where the encounter was played out in two legs but unfortunately it was interrupted by an ugly incident between spectators in 2005 at the CR & FC grounds in a President’s Trophy semi-final. The Blaze Trophy encounter was re-instated in 2013 at the Bogambara stadium, a game which ended up in a tight 8-8 deadlock. In 2014 & 2015 the trophy remained in the Hill capital as Kingswood held the upper hand over the Wesley-ites.

Wesley College has had a pretty good season so far, coming close to beating a couple of top teams while Kingswood, on the other hand, has not been able to hit their straps. The Kingswoodians will be hoping that newly appointed Coach Mothilal Jayathilake will have an immediate impact on the fortunes of the team.

Under Zayan Sabar’s captaincy Wesley College has a pretty balanced team this season. Former captain Omar Kuthubdeen, playing in the line, will surely look to put the young Kingswoodians under pressure. Kingswood would have to play out of their skins if they are to retain the Blaze Trophy.