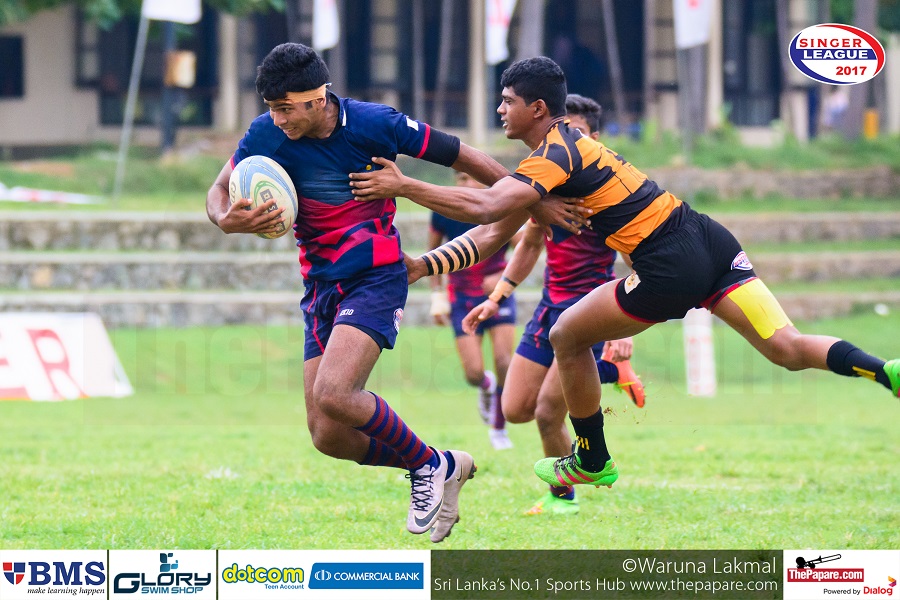 Kingswood College began proceedings with the intention of sweeping aside DS Senanayake College and to make it into the premier division of school rugby.

Things did not seem to go the way of the visitors as the home team proved to be no pushover.

The visitors five-eight, Ranaweera crossed over the white wash to make it a two point game, making the man advantage count, soon after home team hooker, Ranga saw yellow for what seemed to look like some silly continuous infringements.

Try scorer Ranaweera saw his jersey ripped off for his troubles as fullback Gunathilake assumed kicking duties and failed to convert. (DS 07-05 KCK)

Both teams lost a player before the halftime hooter. First Kingswood flanker saw yellow for a high shot, soon after DS flanker for continuous infringements at the breakdown.

DS number eight missed a front-on penalty just minutes into the second half as the hosts piled on the pressure.

Meanwhile, an attack move yielded a try, as Ranaweera weaved his way through and chipped for halfback partner, Heshan Senan to touch down in comical fashion.

The bouncing ball was booted by a DS defender but it held up in-goal for the scrum half to touch down even though they were a man down with winger Senevirathne sin-binned for what seemed to be a high shot.

Ranaweera missed the conversion as the home team trailed by three. (DS 07-10 KCK)

With the game in the balance, DS pushed hard for what looked like the final try of the game, only for Kingswood to say, otherwise.

Hardworking flanker Samarawickrama turned over and managed to touch down few minutes later to regain the lead for the home team.

Hemasiri unfortunately missed the conversion as it was two points separating the two sides. (DS 12-10 KCK)

With time running out on the visitors, tight head prop Weerasinghe saw yellow as they seemed to be heading towards a sorry defeat.

DS eager to hang on, defending a final hoorah towards the try from the visitors, but failed as Chandrarathne crashed over from close range to grab the lead back.

Ranaweera converted the final try, making it a five point game with three minutes left on the clock. (DS 12-17 KCK)

DS to their credit fought hard, running tirelessly toward the elusive Kingwood try line but failed with their efforts as the visitors hung on by the scruff of their teeth to secure a tight win.

Pathana back to lethal best to claim the crown!