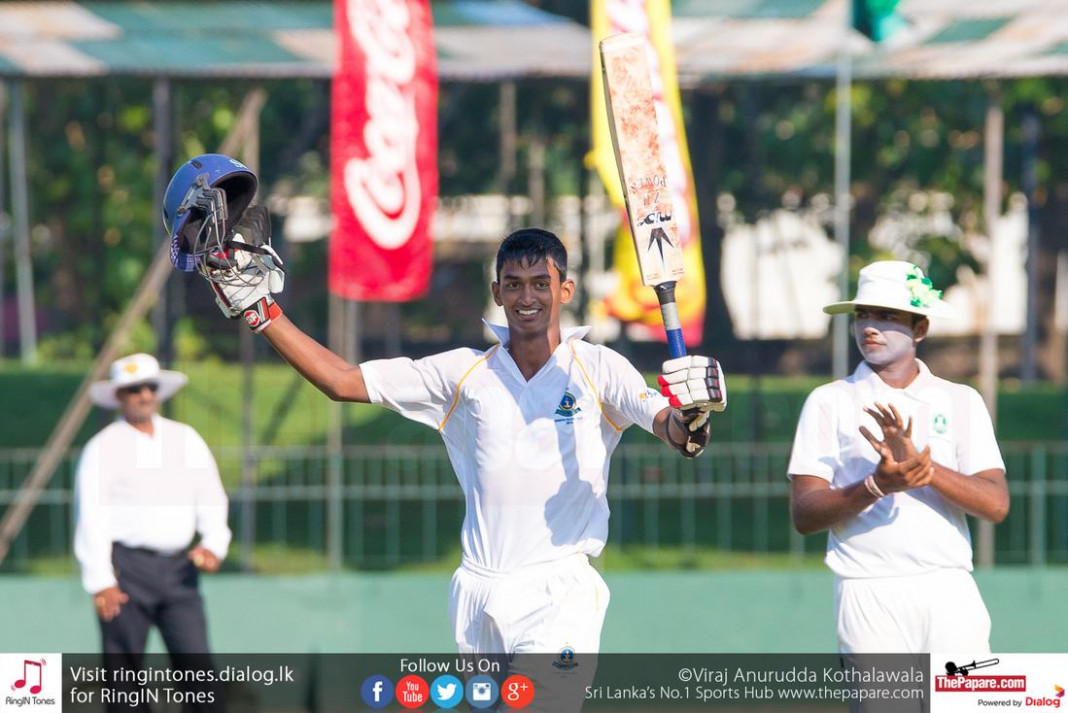 Kasun Abeyrathne scored an unbeaten 125 for Thurstan College in their first innings at the 53rd Battle of the Brothers that commenced at SSC this morning.

March Madness kicked off with the Battle of the Brothers at the Sinhalese Sports Club today with both teams being led by National U19 players. Thurstan College was led by speedster Charana Nanayakkara while Isipathana College wasled by Salinda Ushan. Isipathana College after a brilliant season looked to be favorites but stats are just numbers when it comes to cricket.

Photo Album – 53rd Battle Of The Brothers – Day One

Salina Ushan won the toss and opted to field first, which was quite surprising from the Isipathana hut given the fact that they have been so dominant in their batting department. However Thurstan got the first lease of the wicket. The openers for Thurstan did a splendid job in seeing off the new ball, Kasun Abeyrathne and Salinda Samaranayke put up a 37 run partnership in 13.2 overs before Pramod Maduwantha took the edge of Salinda. Vice-captain Sajith Gunathilake came in at first drop and he managed to put up a 70 run partnership with Kasun before he was sent back to the pavilion by Heshan Fernando leaving Thurstan College at 107 for the loss of 3 wickets in 45.5 overs.

Skipper Charana Nanayakkara got in but gave away his wicket cheaply to Pramod Maduwantha. Slowly but steadily the opening batsman Kasun Abeyrathna kept the score board ticking at his end. He reached the magical three figures in the 81st over for the day. His patience and composure should be admired greatly.

At stumps Thurstan was 252 for the loss of three wickets in 95 overs. Kasun Abeyrathne was unbeaten on 125 and Imesh Viranga on 22. Thurstan coming into this match as underdogs put up a good fight against Pathana bowling attack. Pathana on the other hand could not penetrate the batting line up and it must have been disappointing to not been able to take wickets to put pressure on Thurstan College.

Day 2 will commence tomorrow and if you are unable come over to the grounds log on to www.thepapare.com and catch live action of the Battle of the Brothers.