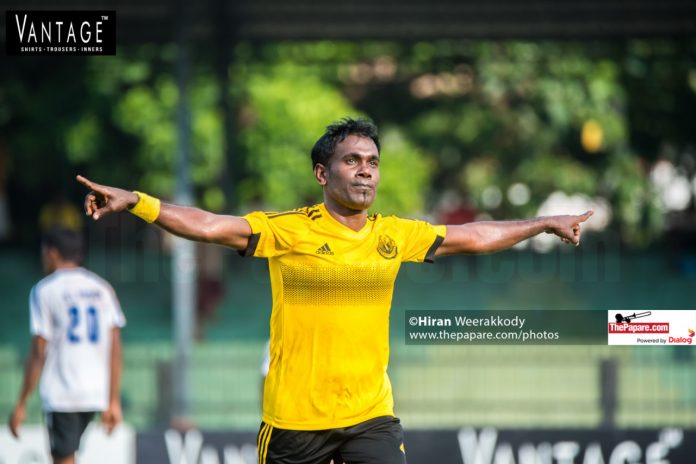 Former Sri Lanka National player and Saunders SC veteran Kasun Jayasuriya is set to retire from playing football after the Grand Final of the FA Cup 2018.

Kasun Jayasuriya, born on 25th March 1980, had his education at Dharmaduta College, Badulla and St. Joseph’s College, Colombo. He is still Sri Lanka’s leading international goal scorer with 27 goals despite last playing for Sri Lanka in 2009.

The veteran striker started his club career playing for Old Josephians before playing for the likes of Pettah United, Negombo Youth, Ratnam SC & Saunders SC. He has also played for Indian I-league sides Indian Bank Chennai and Dempo SC Goa, and has also played for clubs in Bangladesh and Maldives, developing his game internationally for nearly eight years.

Kasun Jayasuriya won the golden boot of the then KIT Premier League scoring a stunning 21 goals in a single season, and is one of the most decorated players in Sri Lanka’s history with three Champions Leagues to his name.

The veteran has made the decision that after the FA Cup 2018, where Saunders face Army, he will retire from the field, hoping he can retire gloriously with the FA Cup for him and for Saunders.

“I have achieved my ‘B’ license in coaching and I plan to continue in football in a coaching role,” he told exclusively with ThePapare.com.

We at ThePapare.com wish Kasun Jayasuriya all the very best in his final match and in all his future endeavours.