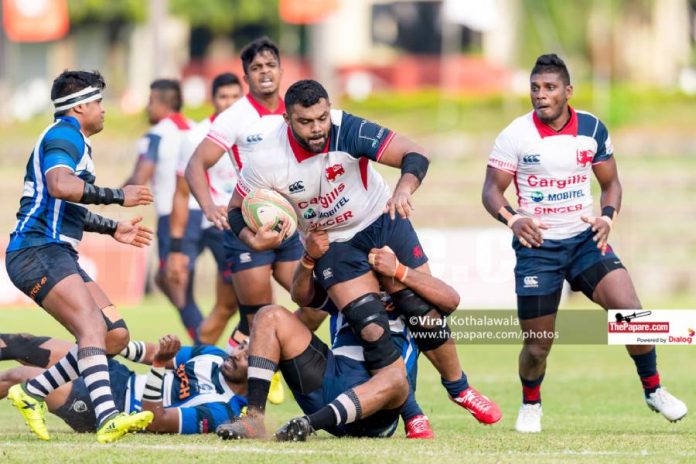 The Dialog Rugby League was in full swing as Kandy SC hosted Navy SC at Nittawela. The rain prior to the match meant this was a muddy affair between two sides at the opposite ends of the spectrum with Kandy SC looking to build on their victory last week and Navy SC aiming to bounce back from the drubbing they received from Havelocks SC.


Thilina Wijesinghe began the scoring for Kandy SC through a penalty. The fullback slotted the kick in without any fuss to put Kandy ahead by three points. (Kandy 03 – Navy 00)

Kandy didn’t take long to breach the defence of the Sailors however; an overthrown line out was collected brilliantly by skipper Nigel Ratwatte and from there Kandy SC played basic rugby, drawing the man and passing the ball and Kavindu Perera finished off the play. (Kandy 08 – Navy 00)

The Sailors were doing good work to force errors from the defending champions but could not capitalize on the opportunities as they lacked discipline.

The Kandy backs showed perfect chemistry and sublime execution as the trio of Nigel Ratwatte, Oshan Perera and Tharinda Ratwatte danced around the Navy defence and scored a well worked try. The move started off from a scrum where Tharinda Ratwatte made a run off a short pass from skipper Nigel and Oshan Perera ran in support to collect the off-load and score the try. Thlina Wijesinghe once again missed the conversion. (Kandy 13 – Navy 00)

Kandy SC was awarded a penalty in-front of the posts albeit around 40 meters away. Thilina Wijesinghe made up for the two missed attempts and put Kandy 16 points in front at half time. (Kandy 16 – Navy 00)

Navy came out of the halftime break all guns blazing but Kandy SC did just enough to keep the Sailors at bay.

Navy finally crossed the try-line thanks to some quick thinking from Adeesha Weerathunga, who took a quick tap when awarded a penalty in the Kandy SC redzone. Thilina Weerasinghe converted the try. (Kandy SC 16 – Navy SC 07)

Kandy couldn’t find their rhythm in the second half and the two missed conversion attempts were starting to look very costly as the Sailors mounted the pressure.

Navy scored after battering the Kandy SC defence through Gihan Perera, the flanker barging through to score his team’s second try. Thilina Weerasinghe converted the try once more to come within two points of the hosts. (Kandy SC 16 – Navy SC 14)

During the dying minutes of the game the Sailors got a chance to clinch the game but Chathura Senevirathna’s attempt went left of the uprights much to the delight of the Kandy supporters. The two teams exchanged possession of the ball multiple times more before Kandy SC secured the ball one last time to finish off the game and cling on to a mere two point lead.

Sri Lanka Junior Tuskers get the go ahead!