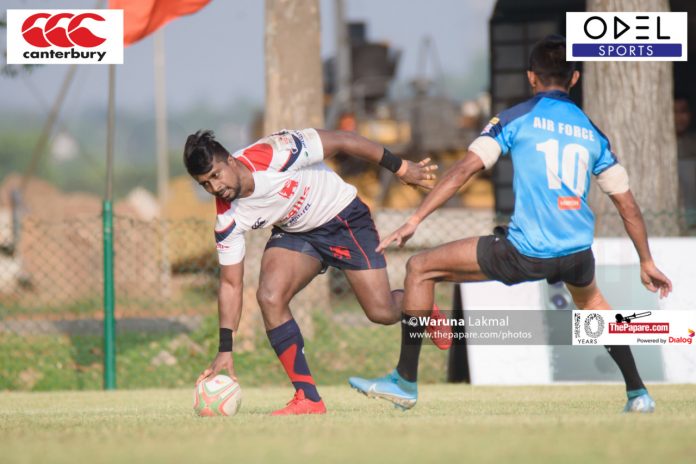 Kandy SC continue to display their dominance in the Dialog Rugby League 2019/20, as they managed to register a commanding victory over Air Force SC today evening. The score-line down at Ratmalana read 55 points to 08 in favor of the defending champions.

Nigel Ratwatte kickstarted the proceedings for Kandy SC against an Air Force outfit who appeared to have done their homework prior to the encounter, as they managed to prevent Kandy from scoring during the first ten minutes of the game. However, Kandy SC managed to break the deadlock in the 13th minute with Lavanga Perera managing to crossover the try line for the visitors. Tharinda Ratwatte was spot-on with the conversion off a tight angle against a strong breeze. (Air Force 00 – 07 Kandy)

Gayantha Iddamalgoda managed to draw first blood for the hosts as he secured 3 points off a straight forward penalty, in the 17th minute of the day’s play. (Air Force 03 – 07 Kandy)

Kavindu Perera managed to extend the lead for the visitors as he scampered over the whitewash near the left side corner flag in the 24th minute. Tharinda Ratwatte failed to bisect the posts this time around.  (Air Force 03 – 12 Kandy)

Air Force SC had an opportunity to gain some points on the board in the dying minutes of the first half, but the Kandyan defense was well equipped to deny the hosts of an opportunity to get back into the game. However, the Airmen seemed to have pushed their visitors on the back foot, as they managed to hold off Kandy from their usual high scoring game in the first half.

Despite their impressive first half performance, Air Force faced a major setback 2 minutes into the second half as Suhiru Anthony managed to gain 5 points for the visitors off a pick and roll near the try line. Tharinda managed to bisect the posts to secure the extra two. (Air Force 03 – 19 Kandy)

Three minutes afterwards, Jason Dissanayake managed to score the bonus point try for the hill country club, as Tharinda managed to curl the ball through the posts to complete a 7 pointer for the visitors. (Air Force 03 – 26 Kandy)

Replacement forward Yohan Perera managed to press the breaks on the Kandyan onslaught when he moved over the whitewash off a rolling maul, much to the relief of the hosts. However, Gayantha Iddamalgoda failed to bisect the posts to add the extras. (Air Force 08 – 26 Kandy)

Shabeer Mohomed was issued a yellow card due to an infringement during the events leading to the Air Force try, which meant that the visitors were down to 14 men by the end of the 51st minute. However, Tharinda Ratwatte managed to extend the lead for his team and even take a few minutes off the clock as he slotted in a penalty from just inside the 50 meter line. (Air Force 08 – 29 Kandy)

Shabeer Mohomed managed to make amends for his time off the field as he secured 5 points for the visitors after some brilliant work by Srinath Sooriyabandara and Damith Dissanayake inside the Air Force twenty-two. Tharinda was spot on with the conversion yet again. (Air Force 08 – 36 Kandy)

Tharinda was once again in action with the kicking duties as he successfully converted two back to back tries by Diluksha Dange and Suhiru Anthony. (Air Force 08 – 50 Kandy)

Srinath Sooriyabandara’s unconverted try in the 78th minute was the icing on the cake for the visitors as they recorded a massive victory over an Air Force team which seemed to be stunned by the second half Kandyan blitz.

Kandy’s second half performance in the absence of Buwaneka Udangamuwa, as well as after the injuries to Shehan Pathirana and skipper Nigel Ratwatte during the first half, was a clear reminder as to why they are recognized as a champion side. With their next few games being played down at Nittawela, Kandy will fancy their chances on retaining the league title for yet another year.

Conversions (6) and Penalty (1) by Tharinda Ratwatte