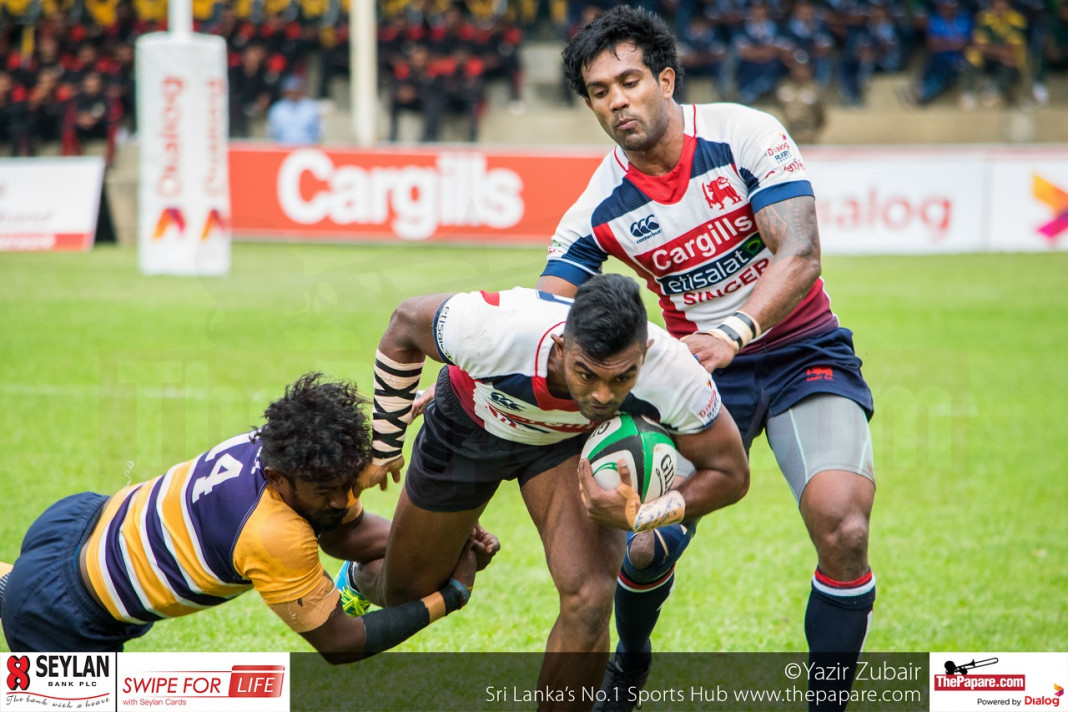 Kandy finished the year on a high, beating the Soldiers at Nittawela in their first match of the second round. They won the match with a score-line of 50- 19, scoring a total of 8 tries of which 5 were converted. Army got their 19 points through 3 tries of which 2 were converted. At the breather the score read 28-07 in favour of the home team.


It was dominant performance by Kandy, with Nigel Ratwatte returning from injury and Heshan Silva slotting in at Number 8 to replace the injured Buwanaka Udangamuwa.

The gamecommenced with the whistle of Priyantha and Kandy, almost immediately, got a lineout after the restart. They drew first blood through skipper Roshan Weerarathne who sprinted 20m to score in the left corner of the field after stepping inside the Army fly half. Thilina Wijesinghe converted from the left flank with a slight breeze helping the ball go the distance. (07 Kandy – 00 Army)

Army then had plenty of possession in the Kandy half but couldn’t convert it into points due to the strong defense by the home team. They built at least 10 phases before they gave away possession.  Kandy maintained pressure and eventually scored their second try of the game through Damith Dissanayake, after some impressive work by Heshan Silva and Yakoob Ali. Heshan made a good 20m break through the Army defense before Yakoob broke through and was taken down inches short of the line. The ball was left to Damith Dissanayake who pickedit up and crossed the line. Wijesinghe made no mistake with the conversion from the right flank. (14 Kandy – 00 Army)

Minutes later Roshan Weerarathne executed a stunning bank hand, after receiving the ball from the scrum, which found Richard Dharmapala who made no mistake in scoring the third try after sprinting 10m to the line. Thilina Wijesinghe added the extras with ease. (21 Kandy – 00 Army)

Army was seen to be using their forwards a lot throughout the game and they did certainly make some inroads into the Kandy defense. Ashoka Jayalal in particular was impressive and succeeded in scoring under the posts as the Soldier took their lineout ball and the forwards drove to the line. Gayan Salinda put through the conversion from under the posts. (21 Kandy – 07 Army)

Kandy eventually secured their bonus point at the stroke of half time as Shehan Pathirana showed some individual brilliance, beating 5 Army defenders to go over the line. Thilina Wijesinghe made no mistakes with the kick once again. (28 Kandy – 07 Army)

Army was seen to be more energetic with more of the possession in the 2nd half and they were seen to be making a lot of phases. This finally paid dividends when a line-out was taken cleanly and given to the forwards to set up a brilliant try in the corner by their inside wing 3 Thusith Senanayake. The forwards did most of the hard work before the ball was spun wide to Senanayake who dived in. Gayan Salinda missed the conversion from the left corner. (28 Kandy – 12 Army)

Kandy replied almost immediately with a set piece move from a line-out. The ball was collected cleanly by Shehan Pathirana and handed to Damith Dissanayake who set up a ruck. Roshan Weerarathne, who picked it up from the ruck, went by himself to score under the posts. For a moment it looked like the ball was held up but with the help of the touch judge the try was awarded. Thilina Wijesinghe dragged it left of the post, missing the conversion. (33 Kandy – 12 Army)

Army scored once again through Manoj Silva who went right under the posts. Army had built around 20 phases before the Kandy defense finally gave away. Gayan Salinda converted the easiest of kicks. (33 Kandy – 19 Army)

It was then Suhiru Anthony’s turn to get on the score sheet as he too received a brilliant backhand pass from Roshan Weerarathne before making a good 15m run to the try-line. Thilina converted with ease. (40 Kandy – 19 Army)

Yakoob Ali was then sent to the bin to cool off for a high tackle on the Army fly half which looked dangerous. Kandy however scored again even with the one man disadvantage through Uchitha Jayasuriya. He was substituted just before Kandy took the lineout 5m away from the try line which they eventually turned into a rolling maul before touching down. Jamaldeen missed the conversion. (45 Kandy – 19 Army)

Uchitha was again in the action as he scored in near identical fashion to his 1st try. This too wasn’t converted by Jamaldeen. With the kick going astray the referee blew the whistle to bring the game to an end.  (50 Kandy – 19 Army)

Kandy looked solid today with the inclusion of Nigel Rattwatte at the fly half position and Heshan Silva too made an impact after returning from injury. Next week they go down to Longdon place to meet CR & FC for their second match of the second round.