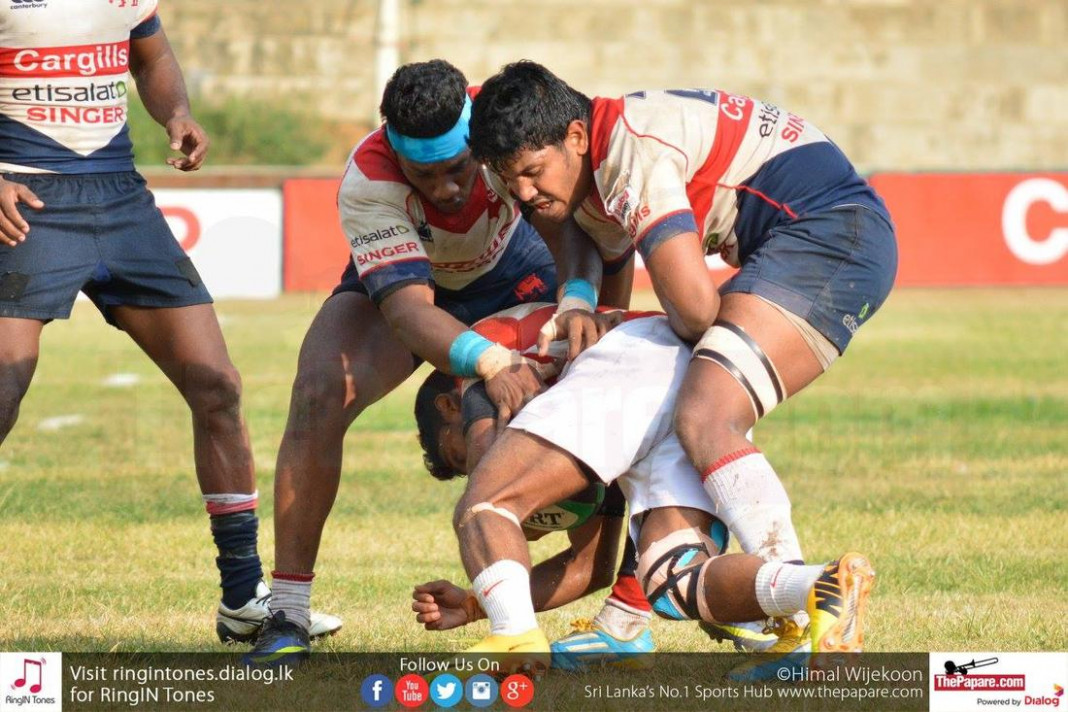 The defending champions of the Clifford cup and this season’s Dialog League Champions, Kandy SC kicked off their title defence at Nittawela today, in front of a reasonable crowd, with a festival of tries against CH & FC.

Kandy who are deemed the favourites to win the Clifford cup, looked like they would go on to score big right from the onset of the game, eventually they did and ended up winning by a huge 89 (13T, 12C) to 7 (1T, 1C) scoreline. Kandy had rested some of their key performers like Gayan Weerarathna and Buwaneka Udangamuwa while Fazil Marija was absent due to an injury. Kandy scored an overall tally of 13 tries with Thilina Wijesinghe, Richard Dharamapala, Lochana Giragama and Shashika Jarawardene scoring 2 tries each and Damith Dissanayake, Oshan Perera, Tharindu Chathuranga , Thisila Karunathilake and Srinath Sooriyabandara scoring one try each. The only conversion that went sway was the 40m kick attempted by Arshad Jamaldeen.

Kandy also tried out all their substitutes with Kishor Jehan and Piyumal Manchanayaka leaving in the first 10 minutes itself to make way for Lasitha Aththanagoda and Mohommed Ali. Kandy was dominant throughout the 80mins giving CH &FC hardly any possession at all. Richard Dharamapala was the first to get on the scoresheet stepping away in a 30m run after receiving an inside pass from Nigel Ratwatte straight of the kick off. Shashika Jayawardene again made a run fending off two defenders to score immediately after the first try was scored; within 5 minutes of play Kandy had taken a lead of 14. CH & FC’s sole consolation try came off a pass intercepted by Prebath Jayalath who had a 70m sprint to the try line with Vishwamithra Jayasingha giving chase. CH & FC made some schoolboy errors, the passes not going to hand and the kicks not finding touch and Kandy capitalized on all the little mistakes that the CH team made. Richard Dharamapala again showed his skills in stepping as he touched down beneath the posts making the score 21-07 to Kandy. Soon before half time the substitute on for Vishwamithra Jayasinghe, Lochana Giragama scored in the left corner receiving a pass from Thilina Wijesinghe. All the conversions were taken by Nigel Ratwatte in the first half.

The second half was no different from the first. Kandy was able to score 9 tries in the second 45 minutes of the game. Damith Dissanayake who played hooker went under the post from a scrum that was awarded for a knock on by one of the CH players while Thilina Wijesinghe added the extras. At this point almost all the Kandy bench was on the field and they were all tried out by Sean Wijesinghe to give them some game time ahead of the Semi finals. Kandy again scored three regulation tries in quick succession through Oshan Perera, Tharindu Chathuranga and Shashika Jayawardana with Thilina Wijesinghe adding the extras making the score 56-07. Thilina , who had a brilliant game, scored his first , scoring in the left corner and later scoring another in the right corner, which made it 20 points in the match for him. (2T, 5C) Soon after Srinath Sooriyabandara show cased some individual brilliance running 70m to score under the post making the score 75-07.  At this point CH had no answers for the soaring attacks by the Kandy backline and things got worse with Lakshan Jayapala being shown a yellow card for a high tackle on Srinath Sooriyabandara. During the sin bin period Kandy scored again through Thisila Karunathilaka and Lochana Giragama which were converted by Arshad Jamaldeen and surprisingly Shashika Jayawardana who decided to have some fun.

This win would have given the youngsters in the Kandy team a lot of confidence because they were given game time and it will, no doubt, be useful when facing either Navy or Police next Saturday in the Semi finals of the Clifford cup.