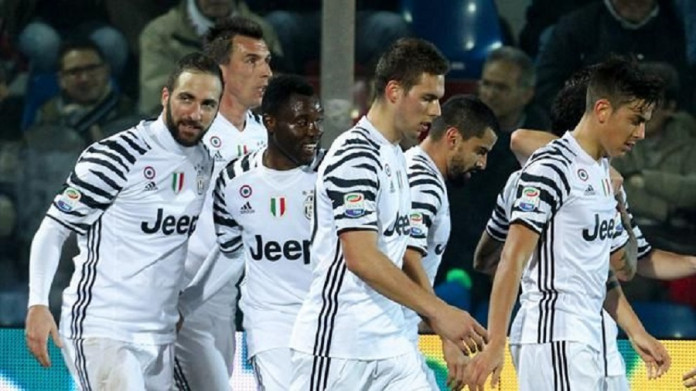 Juventus extended their advantage at the top of Serie A to seven points after goals from Mario Mandzukic and Gonzalo Higuain secured a 2-0 win at struggling Crotone on Wednesday.

Nine-man AC Milan ended their four-game losing streak with a last-gasp 1-0 win at Bologna as Mario Pasalic struck an 89th-minute winner to take them up to seventh on 40 points.

Crotone headed into the match against Juve nine points adrift of safety but they defended resolutely until Mandzukic fired home in the 60th minute after goalkeeper Alex Cordaz parried Kwadwo Asamoah’s header into his path.

With the hosts’ resolve broken, Higuain added a second 14 minutes later when he finished past Cordaz after being found by a delightful threaded pass by Tomas Rincon, making his first league start for Juve, as Massimiliano Allegri’s side made the most of their game in hand.

“We did well to stay patient,” Juve defender Leonardo Bonucci told the club’s website (www.juventus.com). “These three points are crucial in our attempts to bag a sixth straight Scudetto.”

The win took Juventus up to 57 points and re-established the champions’ seven-point lead over AS Roma who thumped Fiorentina 4-0 on Tuesday. Napoli could close the gap to six points if they beat Genoa at home on Friday.

“Roma and Napoli are playing well,” Allegri added. “But we just have to concentrate on what we need to do.

“Tonight, for example, we didn’t concede and that’s a positive for sure.”

Milan played the final half hour of a scrappy game against Bologna with nine men following the dismissals of Gabriel Paletta and Juraj Kucka, but nabbed all three points when Pasalic met Gerard Deulofeu’s cross from point-blank range.