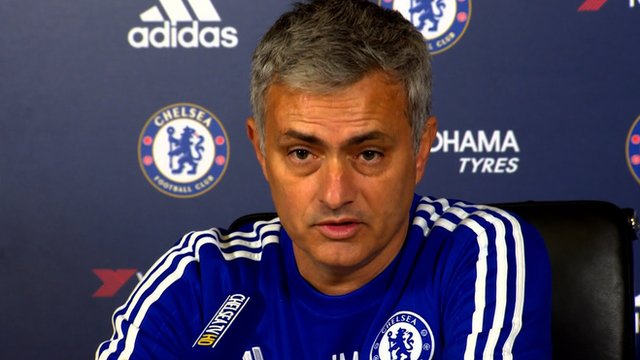 Chelsea boss Jose Mourinho wants to achieve a “dream” by finishing in the top four at the end of the season.

The Premier League champions have struggled so far, lying in 14th place, 14 points off fourth position.

“Maybe we have a chance to dream with a great finish and finish fourth. While it is mathematically possibly, we have to try,” said Mourinho.

The Blues travel to face surprise leaders Leicester in the league on Monday (kick-off 20:00 GMT).

‘I was convinced of fourth’

In a season full of shock results for Mourinho’s men, last weekend’s 1-0 defeat by Bournemouth at Stamford Bridge was arguably the most surprising.

The Cherries became the first promoted side to beat Chelsea at home since Charlton in April 2001. It left the London side just two points above the relegation zone.

Which PL boss wins the most games?

“Before we lost the last three points against Bournemouth, I was convinced of fourth, of a great December for us,” said Mourinho. “I have to be honest and say the last defeat was something that I was far away from believing was possible.

“The reality is that some clubs are doing so well, and some are not capable of doing what people are used to. It is not possible for clubs to win three, four, five, 10 matches in a row now.”

Chelsea’s poor start to the season has led to questions about Mourinho’s future at Stamford Bridge but the Portuguese is adamant he will remain in his job and praised the club’s fans.

“I imagine myself finishing my contract with Chelsea,” he added. “I have three and half years on my contract.

“After that I imagine myself coaching, not every club, there are some clubs I will never manage.

“I think that the bad results are not normal, but the chance for every manager to do his work and finish what he started is. What is not normal is what is happening now.

“When people are so nice to me and they sing my name and ‘Stand up for the Special One’, I feel a bit embarrassed, because I don’t know how to react.”