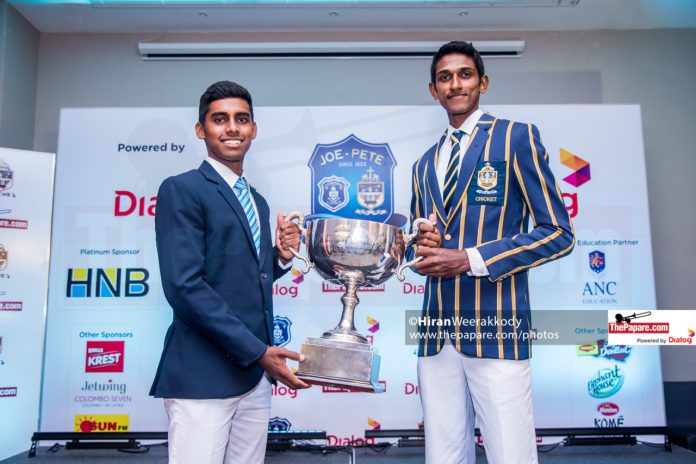 The 85th Battle of the Saints annual cricket encounter between St. Joseph’s College and St. Peter’s College will be played on the 1st and 2nd of March at P. Sara Oval Grounds, Colombo and promises to deliver an exciting brand of cricket and will no doubt exemplify the great values, traditions and pageantry usually displayed by two of the leading catholic schools in the country.

In the past 84 encounters between these two prestigious schools, St Joseph’s have won the trophy 12 times while St Peter’s have bagged the trophy 10 times.

The Rev. Fr. Maurice Le Goc Memorial Trophy is currently in Bambalapitiya after the Peterites last won in 2016 under the captaincy of off-spinner Vinu Mohotty. The Josephians last registered a victory in 2008 under the leadership of opening batsman Ruwantha Fernandopulle.

This time around, the Josephians will be led by Sri Lanka youth player and off spin bowler, Ashain Daniel, whilst the boys from Bambalapitiya will be under the captaincy of all-rounder, Ranmith Jayasena.

Speaking at the media conference on Tuesday evening at Jetwing Colombo Seven, Rev. Fr. Trevor Martin, the Rector of St. Peter’s College said, “The Battle of the Saints is one of the most anticipated sporting events in two of Sri Lanka’s leading catholic schools. I bestow my blessing to both skippers and their respective teams for 2 days of exciting cricket.”

“The ‘Big Match’ between our two schools is one of the most looked forward to events in the Sri Lanka schools cricket calendar by both young and old, and this year’s encounter I’m certain will be no exception,” Rev. Fr. Travis Gabrial, Rector of St. Joseph’s College said. “I would like to extend our gratitude to Dialog Axiata for their gesture to sponsor the 85th annual encounter of the “Battle of the Saints.’ I give my blessings to both schools and may the class of cricket played at the ‘Battle of the Saints’ and Josephian-Peterite comradery grow from strength to strength.”

The much looked forward to 45th Josephian-Peterite limited overs match, which incidentally is the longest running limited over encounter between schools, is played for the Fr. Peter A Pillai trophy, and will be worked off on the 23rd of March at the Sinhalese Sports Club (SSC) Grounds, Colombo.

The Josephian-Peterite two-day encounter as well as the one-day match will be telecasted LIVE on Dialog Television Channel Number 77, live-streamed on ThePapare.com and on the Mobile TV streaming application MyTV.

Video – Proteas can’t have any hiccups against a struggling Sri...