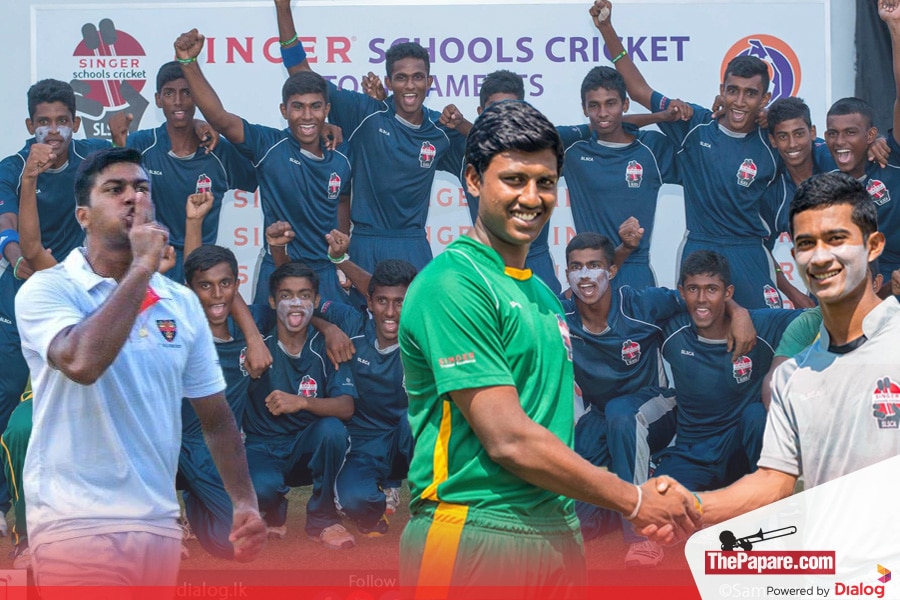 Another exciting schools’ season awaits the cricket-loving public in Sri Lanka as the ‘Singer Trophy’ All Island Under 19 Division 1 Tournament 2016/17 commences this week.

Last season’s three-day league final was not conducted, many players broke down throughout the season due to the high number of matches, there were unsavoury incidents in two separate quarter-final clashes, the main awards ceremony to recognize the achievements has not been held yet…. You can go on and on about the catastrophes that occured during the 2015/16 all-island under 19 schools’ cricket season.

Amidst all the controversies, there were also many positives; an under-rated schools’ team from Galle defeated many high-profile schools, many players reached the 1000-run mark or the 100-wicket milestone, one of the schools’ captains went on to represent Sri Lanka in ODI cricket, two other players made the national squad, the junior team made history in England, conveying that Sri Lanka’s schools’ cricket system remains one of the best if not the best pipelines of talent in the world.

The current season is yet to begin but already there is some controversy brewing. There is an active court-case regarding the age-limit of the players eligible to play in the tournament, after the earlier administrators of the Sri Lanka Schools’ Cricket Association (SLSCA) decided to allow players born on the 1st of January 1997 or later to take part in the upcoming tournament and issued official letters from the Education Ministry to the schools, but the new office-bearers elected in May have reversed the decision.

According to the current administration, the age-eligibility will remain the same as the last couple of years, with any player born on 1st September 1997 or later eligible to take part in this tournament. All these players are also eligible for selection for the upcoming U19 Asia Cup due to be worked off in Sri Lanka this December.

What has the SLSCA done to streamline the upcoming tournament and bring the best out of the players? The simple answer is nothing. They have decided to cut-off the three-day league semi-final and final but decided to go ahead with a two-day version of it.

One of the key issues which has not been addressed by the SLSCA is the promotion of preparing seam-friendly surfaces. Many coaches focus heavily on just winning matches and not on producing quality cricketers, which is the reason for the dearth of world-class fast-bowlers in Sri Lanka as a whole.

In the top division, 36 teams will once again battle it out in 4 groups, with each team playing 8 tournament games. Apart from the 8 matches, each school is expected to nominate 5 more traditional matches to be considered for the player and team performances at the end of the season. The 4 groups were seeded from points gained in the group stages during last season.

Unlike last year, only two teams from one group will qualify for the knockouts, the quarter-finals. All tournament matches are to be completed before the 10th of February, 2017 and all traditional matches before the end of February next year.

Wesley College Colombo and St. Mary’s College Kegalle were promoted to the division one as joint champions of the under 19 division two tournament 2015/16. Royal College Panadura and Holy Cross College Kalutara were demoted to division two from division one.

48 teams will participate in the limited overs tournament from division one (28 teams), Division two (16 teams) and division three (4 teams). The top 16 teams after the limited-overs segment will automatically qualify for the T20 tournament.

Some of the traditional matches are more than 100 years old and due to that fact, most schools have to play about 17-18 matches a season with schools like S. Thomas’ College, Mount Lavinia and St. Joseph’s College playing more than 20 matches this season.

A decade ago only about 12 matches were scheduled for a season. Is it fair to expect a 19-year old boy to play this amount of cricket while concentrating on studies as well? Mind you, straight after the schools’ season is over, most players will be taking part in the SLC under 19 inter-provincial tournament in May, 2017 with the intention of getting themselves in the mix for the ICC Youth World Cup 2018 in New Zealand.

By far the toughest group in the segment with the joint-champions, St. Peter’s College and St. Sebastian’s College keen to battle out for the top two spots, alongside former champions, Trinity College and Richmond College. All four of these teams featured in last season’s two-day quarter-finals.

Teams like Dharmapala College, Pannipitiya, newly-promoted St. Mary’s College, Kegalle and St. Anthony’s College, Wattala will find it tough to compete in the top division and will most probably be the punching bags for the top seeded teams.

Another competitive group, where all 9 teams are equally balanced, which will have no firm pre-tournament favourite to top the points table at the end of the group stage. Isipathana College had a memorable 2015/16 season when they ended up as the semi-finalists and produced five under 19 national players while earning the top-seeded tag.

Teams like Royal College, Ananda College and Prince of Wales’ College can make a very big impact as the season goes by but the unknown quantity of Lumbini College and St. Benedict’s College are also capable of turning the tides.

Last year’s most outstanding outstation team, St. Aloysius’ College, Galle will have two junior national players leading from the front and will give a tough fight to top-seeded S. Thomas’ College, Mount Lavinia.

D.S Senanayake College had a disastrous 2015/16 season but will have the core of the last year’s outfit and will be a force to reckon with this time around. Teams like Zahira College, Gurukula College and Dharmasoka College, Ambalangoda will need to play their best cricket in order to enter the knockouts.

Thurstan College will be the favourites to top the group after a successful 2015/16 season where they registered the most number of outright wins (4) in the group stage. The Josephian side have a few talented youngsters and will look to make a better impact than last year.

The dark-horses of this group would be the St. Servatius’ College, Matara outfit; they were the surprise quarter-finalists last season. Schools like Maliyadeva College, Kurunegala and St. Joseph Vaz College, Wennappuwa can also stake a claim for a knockout berth.